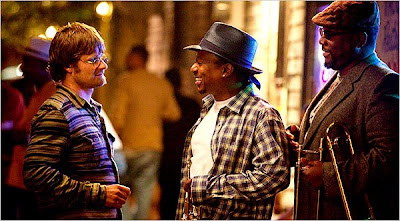 David Simon’s new HBO series is called “Treme” and the title alone suggests the difficulty of the subject. Treme doesn’t rhyme with ream; it’s pronounced truh-MAY, and it’s the name of an old New Orleans neighborhood famous for music — and, in some parts, for crime. It’s the kind of area sought out by intrepid travelers eager to bypass the tourist traps on Bourbon Street, the kind of place that guidebooks label “authentic.”

It’s a title that serves as a warning: people who say it wrong have no right to be there. “Treme,” which begins on Sunday, takes place three months after Hurricane Katrina, and it is a tribute to the “real” New Orleans by filmmakers who have become connoisseurs of the city, depicting its sound and ravaged looks with rapt reverence and attention to detail. The narrative chronicles the efforts of an eclectic group of locals — among them a trombone player, a chef, a civil rights lawyer, a disc jockey and a displaced Mardi Gras chief — as they struggle to repair their lives after the storm. But mostly, their stories follow the music, the real hero of the tale.

The creators, Mr. Simon and Eric Overmyer, are best known for their work on the HBO series “The Wire,” a sprawling five-season drama of crime and corruption in Baltimore, a city that Mr. Simon covered as a newspaper reporter. (David Mills, his long-time associate and one of the show’s key writers, died on the set of “Treme” last month.)

In the new show there is anger over government incompetence and neglect, but this is not a Dickensian exploration of failed institutions like “The Wire.” Nor it a call to arms like Spike Lee’s documentary “When the Levees Broke: A Requiem in Four Acts,” which ran on HBO in 2006. “Treme,” which features real musicians, including Elvis Costello, Allen Toussaint and the New Orleans trumpeter Kermit Ruffins as themselves and the violinist Lucia Micarelli as a street musician, is more an act of love, and, odd as it sounds, that makes it harder to embrace.

The effort to get New Orleans “right,” to do justice to the city’s charm, its jazz tradition, and now its post-Katrina martyrdom, is at times so palpable it is off-putting, a self-consciousness that teeters on the edge of righteousness.

New Orleans is not Venice, but its more chauvinistic natives share the Venetian contempt for tourists. Whether it stems from snobbery or insecurity, some residents nurture a cult of authenticity that villainizes the very outsiders who allow them to remain on the inside. And newcomers who adopt the city as their own sometimes acquire a convert’s zeal. It can sometimes seem as if the creators align themselves with a street musician who in one scene sneeringly plays “When the Saints Come Marching In” for a trio of post-Katrina volunteers from Wisconsin, mocking them for their cornball taste.

Fortunately “Treme” has a sense of humor, and most of all a binding love of jazz. The lilting New Orleans-style R&B theme music, “Treme Song” by John Boutté, is a tip-off: the jaunty good spirits that distinguish the New Orleans sound soften the series’s more moralistic moments.

This is an elliptically told tale, and it takes a few episodes for the plot and the characters to pick up steam. Some of the stars of “Treme,” notably Wendell Pierce and Clarke Peters, were in “The Wire,” but this is not a Bayou version of that show. Hard-core Simon fans will be disappointed if they expect multiple homicides, drug rings and city hall conspiracies.

More than 1,600 people died as a result of Katrina, and three months later in these neighborhoods near the French Quarter there are still missing persons, brawls and bad feeling, as well as members of the National Guard on street patrol. But “Treme” is most of all a story about survival — and the pursuit of pleasure — in the wake of a catastrophe that quickly morphed into, as one character puts it, “federally induced disaster.”

High dudgeon is not the same as hypocrisy. One of the charms of the series is that characters who have let the good times roll right over them don’t begrudge others who are just learning to unwind.

Davis McAlary (Steve Zahn), an alternative-music D.J., is the city’s most zealous booster and snob: a jazz-loving, pot-smoking bon vivant who torments his bourgeois, gentrifying neighbors and denounces his radio station’s new headquarters in what he describes as “the completely soulless, faux-French market, a shameful shell and shadow of its former self.”

Davis turns apoplectic when his station decrees that he play old New Orleans standards during a pledge drive, songs that he denounces, in cruder language, as the New Orleans “canon.” He defiantly puts on “Buona Sera,” a signature song of Louis Prima, a New Orleans native son. It’s not exactly a radical departure from French Quarter fare, but it’s enough for Davis, who happily sings along, surrendering to the swing and sentimentality.

He, like almost everyone else in “Treme,” is battling the sense of powerlessness and loss. When Davis hears stray notes outside his window one morning, he bolts out of bed naked. “They’re doing it,” he shouts, “the first second line since the storm.” He is referring to a New Orleans tradition — musicians and dancers who gather behind the first line of a parade — that has given its name to a style of music and even a dance.

Rickety houses are still boarded up, rotting roofs sag, but half the neighborhood turns out for the second line, dancing, twirling parasols and sashaying as the Rebirth Brass Band tunes up.

That almost doesn’t include Antoine Batiste (Mr. Pierce), a trombone player cadging cab rides to gigs, perpetually hard up and running from woman trouble. Antoine shows up late, but when he catches up and lifts his trombone to join in on “Feel Like Funkin’ It Up,” there is an electrical surge of delight.

Half of Treme has left town, including most of the criminals, but the hardier souls return, and that includes Albert Lambreaux (Mr. Peters), a contractor and Mardi Gras Indian Chief who sets out to repair his house plank by plank. Albert is a man of few words, and that is rare.

Male characters like Creighton Bernette (John Goodman), a professor and lapsed novelist who rants about federal and municipal incompetence in press interviews, are the voices of outrage. But it is the women who do the harder work of doing something about it. While Creighton fumes, his wife, Toni (Melissa Leo), a civil rights lawyer, struggles late into the night with the local bureaucracy, trying to locate a young man lost in police custody during the storm.

Antoine, scrounging for gigs, is too busy or too proud to take the bus to Baton Rouge to visit his sons, but his ex-wife Ladonna (Khandi Alexander), commutes between the two cities to salvage the neighborhood saloon she inherited.

“Treme” uses sound and imagery to suggest that even the worst damage and disruption can’t extinguish the joie de vivre, and that is found in the pearly gleam of fresh oysters, the high notes of Antoine’s trombone, the crunch of barbecue, a glistening bottle of French wine, the feathers on a Mardi Gras costume and, most simply, laughter.

“Are you saying New Orleans is not a great city, a city that lives in the imagination of the world?” Creighton thunders at a British journalist who speaks dismissively of his city’s decline.

The series turns almost didactic at times, but for a reason. “Treme” is a work of imagination that seeks to reacquaint the world with a struggling city’s reality.