Braganti for News Charlie Frattini, who is working on a construction renovation show for the Discovery Channel, at The Blarney Stone.

A lower Manhattan bar was facing last call - until a reality show stepped in to save it.

The Blarney Stone, which opened while the twin towers were being built and later fed the rescuers at Ground Zero, never fully recovered from the attacks of 9/11.

Now, thanks to a new Discovery Channel series, the family-owned pub on Trinity Place is getting back in the black with a complete renovation.

On "Construction Intervention," host Charlie Frattini, a 25-year construction veteran from Brooklyn, uses his talents to help small businesses in danger of closing because of bad contractors and botched building.

In Tuesday's series premiere, Frattini's crew has its work cut out for it with the Blarney Stone, which was opened in 1968 by Irish immigrant Michael Keane.

Forty years later, the restaurant's bar was overrun with termites, the sinks and steam tables leaked, and the stools were held together with duct tape.

"The rent and expenses were going up and up, and we didn't have the money to fix things ourselves," explained Joe Keane, 41, of Woodside, Queens, who took over the business with his brother Teddy in 2005. The bar had fallen into disrepair after their father died, and business dropped off 60% after 9/11.

"The fact that it got that bad, it was so embarrassing," said Joe Keane. "But to get a chance to make it better was amazing."

The Keanes handed over the keys to Frattini on Nov. 9 and let the Discovery crew tear the place apart.

"This was our first project, our guinea pig, and we didn't even know that we could do this in four days," admitted Frattini, a Marine who set a tight deadline because he knew the bar lost money each day that it was closed. "This was probably a six- to eight-month project, but we did it in time."

The tough-as-nails Frattini worked his men around the clock to build a brand new bar, install new ceiling beams, replace the air duct and add a new vestibule.

The pub was also fitted with new wall sconces and tables, a state-of-the-art steam counter and new refrigerators, plus a new dining area for private parties.

Even more importantly, a mural of the twin towers that a friend had painted for the family was restored on the back wall.

"When 9/11 happened, the Blarney Stone opened its doors to the rescue workers, and they kept this place open for nothing," said Frattini, who said he also worked at Ground Zero. "And that's one of the reasons I just had to come down here, because it was time to give something back to them."

Just three weeks after construction, the Blarney Stone's business was up 10%, and the bar had one of its best nights ever this past St. Patrick's Day.

"These guys kept us open," said Joe Keane, raising a glass with Frattini in his shining new bar. 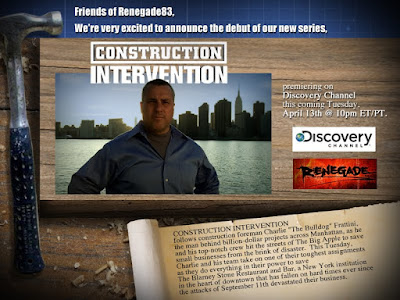