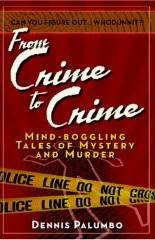 Years ago, upon hearing of the death of iconic film director Stanley Kubrick, a friend of mine commented, "Well, that's another fallen redwood in a rapidly dwindling forest."

I was thinking about his remark the other day, in the wake of the recent deaths of two iconic crime writers, Robert B. Parker and Dick Francis.

With his 37 novels featuring private eye Spenser, Parker created a vivid character whose adventures not only were in the best tradition of the genre but also presented a wry picture of contemporary Boston society. The character's popularity was cemented even among non-book readers with the long-running TV series Spenser: For Hire, which starred Robert Urich.

Parker, who died writing at his desk at age 77, received the coveted Mystery Writers of America Edgar Award for Best Novel in 1977 for Promised Land. The same organization named him a Grand Master in 2002.

Well-known for his mysteries set in the world of horse racing, Dick Francis was a former jockey himself and one of the most honored crime writers of all time. He earned three Edgar Awards for Best Novel, and was also subsequently named a Grand Master by the MWA. The salient feature in his stories was the fact that his heroes--men like Sid Halley--were depicted as completely ordinary, maybe even down-on-their-luck men. As in the best films of Alfred Hitchcock, Francis told stories about ordinary men caught up in extraordinary circumstances.

But make no mistake--with the passing of these two great writers, the forest is significantly thinner. (Though the genre is so resolutely healthy, among both writers and readers, that new shoots are popping up every day.)

By the way, if you're not familiar with either of these fine authors, you might want to pick up Parker's first Spenser novel, The Godwulf Manuscript, or Dick Francis' Whip Hand, to remedy that lamentable situation.How To Order "From Crime To Crime" by Dennis Palumbo

Buy it through Amazon.com, from the publisher, Tallfellow Press, and from fine bookstores everywhere.

The forest definitely is thinner without them. The good news is, they've left a very distinctive trail that others will be following for years to come.