‘The Kennedy Detail’ is a story that demands to be told 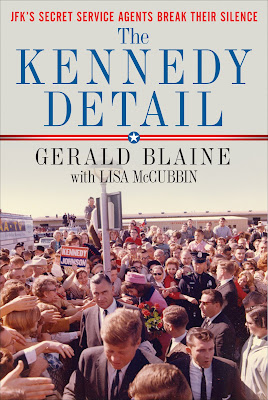 For more than 40 years, Jerry Blaine and his colleagues adhered to a strict code of silence. They didn’t talk about the most devastating event in their lives — one of the most terrible in this nation’s history. They didn’t discuss the assassination of President John F. Kennedy.

It was particularly hard on Blaine and his friends because they were all Secret Service agents in November 1963, members of the team assigned to protect the president — the Kennedy Detail.

Blaine has written a book by that name, with the help of a longtime family friend, newswoman and author named Lisa McCubbin. “The Kennedy Detail” is to be published and released in November. A Discovery Channel show with the same name, featuring eight of the agents who were in Dallas that day, is also scheduled to air in November.

Blaine said he felt “compelled” to write the book. After he watched Oliver Stone’s infamous conspiracy biofiction, “JFK,” he told himself, “That’s the last thing I’ll look at related to the assassination.” But, once he retired from security with large companies and he began seeing all the misinformation and outright deceit about the assassination on the Internet, as well as in books and films, he decided, “Essentially, it was a book that had to be written.”

Beginning about five years ago, Blaine began contacting all he could of the 38 agents who were in the Kennedy Detail on Nov. 22, 1963 — he listed 16 who still survived as of last week. He also contacted others who served on the presidential detail during the Kennedy years, but had left the service or been assigned to other duties prior to that fateful date — more than 60 people in all.

With the exception of one former agent, who told Blaine he just couldn’t bear to discuss the assassination, “all of them talked,” he said. “It didn’t matter if they were on site or not. It affected all of our lives.” And they wanted to set the record straight, to make sure history had their perspective.

Blaine was in Dallas early on the morning of Nov. 22, 1963, but flew to Austin prior to the Kennedy motorcade to prepare for the next stop on the president’s Texas tour. He had served a midnight-to-early-morning shift, and was sleeping when news of the shooting broke. He was ordered to Washington, and arrived just about the time that his new boss, President Lyndon Johnson, returned to the capital.

There was no time for grief, and little inclination on the part of the agents to talk about what had happened. If they weren’t directly involved in the investigation, they simply moved on to taking care of the new president and his family.

But, in less than a year, Blaine and several others had left the service.

“I saw the futility and vulnerability in protection,” he said. “I realized, we could only do so much.”

Blaine would go on to a lengthy career doing security and computer work with IBM, as well as other private companies. He spent a lot of time overseas, and worked with the government to help get oil-field workers out of Kuwait prior to the first Gulf War.

Blaine lived in Grand Junction for a time as a child. He moved back here six years ago. A visit to Blaine’s office in his home on the Redlands reveals many mementos of career, in the Secret Service and with private firms. There are signed photos from Dwight and Mamie Eisenhower, the first president and spouse for whom Blaine served. There are plaques recognizing him for service in the private arena and a Secret Service seal on one wall. There is a sense of history contained within.

But sometimes, that history seems more immediate. While I was visiting last week, Blaine received a phone call.

When he hung up, he said, “That was our Miss Moneypenny,” a reference to the famous James Bond secretary. The Secret Service administrative assistant had been in Washington when the assassination occurred. She and Blaine discussed a part of the post-assassination investigation, about which they each had first-hand knowledge.

My knowledge of the Kennedy assassination began, as it did for so many Americans, with TV news coverage that horrible day. We turned on the television in my elementary school, fifth graders barely able to comprehend what had occurred. My mother, who despised Kennedy as president, wept most of that long weekend as we watched the funeral and related events.

There are iconic images — young John Kennedy saluting his father’s casket — that are part of our shared culture and national memory.

I have read countless books, magazine and newspaper articles about the assassination, watched movies and television shows. But to listen to part of a telephone conversation between two people who had intimate knowledge of that tragic event seemed strange, even a bit disconcerting. Suddenly, it didn’t feel like ancient history.

Blaine is right. “The Kennedy Detail,” with its perspective from the Secret Service agents who have finally dropped the code of silence, is a book that needed to be written. I can’t wait to read it.