Terry Stanfill will be presenting her novel, The Blood Remembers: 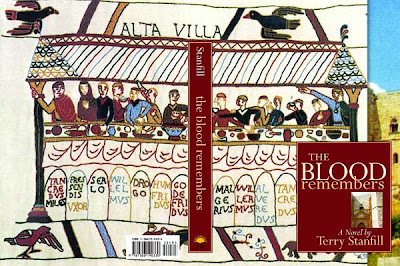 The Blood Remembers
A Novel by Terry Stanfill

Rose Kirkland, a jewelry designer living in Santa Monica, struggles with a troubled marriage and her inability
to have a child. In the midst of these tensions, she is startled by a mysterious inner voice, that of a young woman sent by her family to marry a man she has
never met. Slowly and startlingly, Rose begins to realize that the voice is her own—a persona from a richly cultured past life, its presence so compelling it permeates the present.
With her husband's approval, Rose travels to Europe to trace the origins of the voice. While on her journey she inadvertently unravels a mystery surrounding the medieval emperor, Frederick II and the legendary king, Prester John. The quest leads her to Oxford, England,
to Vieste, her father's birthplace on the Adriatic coast of southern Italy, and finally to Pirou Castle in Normandy, France, where Rose discovers a link to her own reality
as past and present fuse in an odyssey of desire and self-discovery.