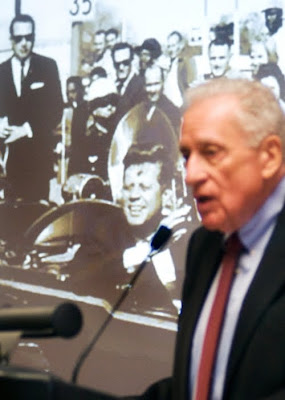 On Nov. 22, 1963, three shots rang out in Dallas and echoed across the country. President John F. Kennedy was assassinated and the world was left to wonder why.

In the near half century since, a multitude of conspiracy theories have developed, but former Secret Service agents Clint Hill and Gerald Blaine, who were with Kennedy and his family from his election until his untimely death, have come forward to give their eyewitness views on the events of that day.

On Tuesday morning, Blaine, Hill and journalist and longtime friend Lisa McCubbin discussed the events of that day at the Union as part of a national tour.

Blaine, along with McCubbin, authored “The Kennedy Detail,” a recent book revealing a firsthand account of the Kennedy assassination from the view of Kennedy’s security team, including Hill — who is famous for jumping on Kennedy’s car after the shots to cover his body.

“My task was to research for about six years on this book to make sure that everything we put down in that book was fact,” Blaine said. “That’s when you find out that there are erroneous reports, there are conflicts. Some of the reports conflict with other reports. So we decided we better make sure we’re accurate.”

Blaine and Hill discussed their experiences as service members on the Kennedy detail, beginning with their first encounters — Blaine with the president and Hill with the first lady and family — all the way down to the disturbing details of Kennedy’s murder.

Hill said despite speculation about potential conspiracies, no significant evidence has pointed to any perpetrator other than Lee Harvey Oswald.

The event was sponsored by the Institute for Public Policy and Social Research. The institute’s director, Doug Roberts, said it was a great opportunity because Kennedy’s Secret Service is relevant to MSU and to him personally.

Several members of the Secret Service at the time were MSU alumni, and one of the agents was Roberts’ father, Emory Roberts.

“My brother lives in Jacksonville, Fla., and he, by chance, found out that (Blaine, Hill and McCubbin) were doing a book tour down there,” Doug Roberts said. “He talked to them, and they of course mentioned that they knew our father. So I called them after and said, ‘Can I talk you into coming to East Lansing?’ And one thing led to another.”

Students, teachers and community members from the surrounding areas, such as Dennis Schwartz of Okemos, gathered to hear the personal stories about one of the country’s most beloved first families.

Schwartz said Kennedy has been one of his heroes since childhood, and he always has been interested in Kennedy’s legacy.

Schwartz expressed his appreciation for what Blaine and Hill have done with their book and speeches such as this.

“It’s important to put on the record people who were there, directly participated (and) directly observed so it’s preserved for future history what actually happened,” he said.

Criminal justice freshman Tyrone Bonds shares a similar fascination about Kennedy, but his interest is focused more specifically on the president’s death.

Bonds said he still believes there was a greater conspiracy behind the assassination after listening to Blaine and Hill’s accounts, but he found their stories to be gripping.

“When (Hill) said Jackie Kennedy held her husband in her arms after he was shot, that’s what really stood out,” he said. “The presentation was absolutely wonderful. I really enjoyed it.”

U.S. Secret Service Agent Clint Hill speaks about details of the assassination of former President John F. Kennedy on Nov. 22, 1963 in Dallas, as he was present at the time, seen in the upper left hand of the projected photograph riding behind the president’s vehicle. Hill was speaking with the co-authors of The Kennedy Detail, U.S. Secret Service Agent Gerald Blaine and Lisa McCubbin, Tuesday morning in the Union.