THE PLIGHT OF THE SECOND NOVEL [via Katherine Taylor]

My Editor, My Wife

I save her marked-up manuscripts as an unluckier husband might save love letters. 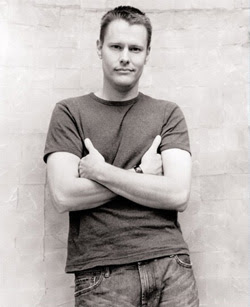 Last June, I finally got up the nerve to show my wife the novel I'd been working on for almost four years. I didn't want to—not yet—but after several deadline extensions, I had two months to deliver a finished manuscript to my publisher.

Deborah and I met in 1993, in the graduate creative writing program at Ohio State. She was a year behind me but four years older, with a tangle of thick brown hair and a long, sure stride. I found her irresistible from the first time she blew me off, at a professor's party for new students. I'd been assigned to be her mentor; she had no interest in being my mentee. I remember thinking—hoping—she'd give me my due once she read my work. And she did. But it was Deborah who turned out to be, hands down, the best writer in the program, as well as a brilliant reader. We became friends over bottles of High Life with the other MFAs in the sticky booths at Larry's Bar, building the trust you need to give and take criticism. And then, like a surprise ending that in hindsight seems inevitable, we fell in love.

Since then, Deborah has edited every piece of prose I've written. Though her criticisms are often less than gentle ("I'm going to throw up" is a representative margin note), she makes my work better. Much, much better. I save her marked-up manuscripts as an unluckier husband might save love letters.

But this manuscript wasn't ready to be marked up. It sat on our bedroom dresser, unread, as the clock ticked. Even though we weren't in the habit of talking about my work-in-progress, the fact that after all this time I hadn't shown her any pages made it perfectly clear that the book was a mess.

My first novel had gotten good reviews and sold, for a first novel, reasonably well; I wanted to do better this time. At the very least, I wanted not to go backward. This novel's success would also impact my next book deal—hell, it might determine whether there would be a next one. And then there was Deborah. She works as a high-level editor at a major magazine; I didn't want to put her in the position of walking into the office the wife of second-rate novelist. The prospect of embarrassing her—of being anything less than a husband she might feel the urge to brag about—was even worse than the prospect of embarrassing myself.

After three days, she started reading.

So much work, in fact, that when she finished reading, we seriously discussed killing the deal. Better to pay back the advance than publish a novel before it was ready, right? But I'd long since spent the advance. Not turning the book in, or turning it in and having it rejected, would have meant paying back money I no longer had.

Email ThisBlogThis!Share to TwitterShare to FacebookShare to Pinterest
Labels: writing