WASHINGTON — Justice Ruth Bader Ginsburg, whose writing is clear but dry, said her style owed something to Vladimir Nabokov, the author of “Lolita.” 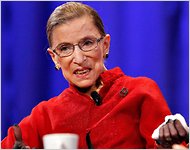 Justice Ruth Bader Ginsburg said her writing style owed something to Nabokov, from whom she took a course at Cornell. 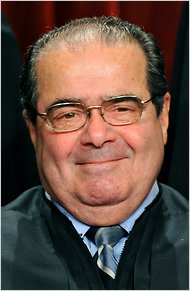 Justice Stephen G. Breyer, who has been known to cite foreign law in his opinions, said he looked abroad for literary inspiration, mentioning Montesquieu, Wittgenstein, Stendhal and Proust.

Justice Clarence Thomas said a good brief reminded him of the television show “24.”

In a trove of interviews that are to Supreme Court obsessives what the State Department cables released by WikiLeaks were to students of American foreign policy, eight Supreme Court justices described how they write their opinions, what they look for in briefs and the art of legal writing generally.

The interviews, which had been available only as videos on the Web site of a company that tries to teach lawyers how to write, have just now been published in The Scribes Journal of Legal Writing.

Since the interviews were first posted in 2008, they were little noticed except by Supreme Court advocates, who have studied and dissected them. At least one leading law firm prepared its own informal transcripts.

The justices turn out to be a surprisingly literary bunch. Justice Kennedy, the court’s swing justice, had barely started talking when he began quoting from Hamlet, and he went on to discuss Dickens, Trollope, Faulkner and Solzhenitsyn.

Justice Ginsburg said she had learned much from a course Nabokov taught at Cornell on European literature.

“He was a man in love with the sound of words,” she said of her former professor. “He changed the way I read, the way I write.”

Justice Thomas, on the other hand, cited only a single author, and then only by way of contrast. “It’s not a mystery novel,” he said of a good brief. “People can’t think, ‘I’m Agatha Christie,’ or something like that.”