The television winner of the Faith & Freedom Awards Goes to “The Lost Valentine!” 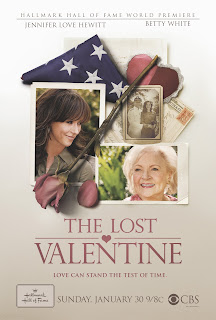 On Friday, February 10, the winners of the 20th Annual Faith and Values Awards were announced at the Universal Hilton Hotel in Hollywood. A number of worthy films and television programs received prizes for their positive elements from patriotism to family values.
The Movieguide Faith and Values Awards are sponsored by the Christian Film & Television Commission and Movieguide, founded by Dr. Ted Baehr. The glittering event, also dubbed the “Christian Oscars” attracted a number of Hollywood executives, producers, writers, and directors, and major celebrities including Joe Montegna, Kevin Sorbo, James Patrick Stuart, and Pat Boone.

Email ThisBlogThis!Share to TwitterShare to FacebookShare to Pinterest
Labels: awards, The Lost Valentine