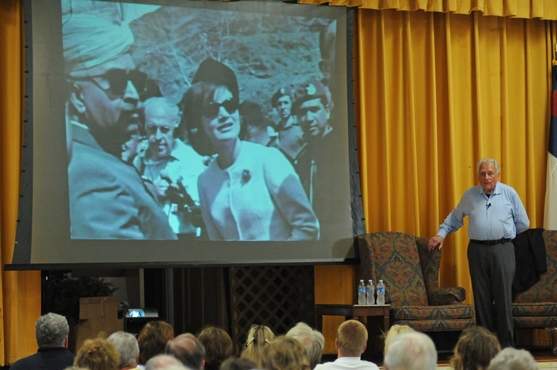 HYANNIS — In 1961, President John F. Kennedy famously proclaimed he was "the man who accompanied Jacqueline Kennedy to Paris."


But another man was there every step of the way as well, to protect her in happier moments and comfort her in tragic ones.

"She was an elegant, classy, very intelligent lady who eventually became a good friend," Clint Hill, one of two Secret Service agents assigned to protect the first lady, said.

On Sunday, Hill and Lisa McCubbin, who co-wrote the new book "Mrs. Kennedy and Me," spoke to a packed Fellowship Hall at the Federated Church of Hyannis about those days. The talk was sponsored by the John F. Kennedy Hyannis Museum Foundation.

Hill's image was burned into the country's collective memory on Nov. 22, 1963, when the photo of him diving across a car to protect the Kennedys from additional gunfire was published across the world.

Hill had joined the Secret Service at age 27 after a stint in the Army, and he was assigned to protect President Dwight Eisenhower.

Upon Kennedy's election, though, his assignment switched, to his chagrin.

"Before, the wives' protectors went to tea parties and fashion shows. ... She didn't want me there and I didn't want to be there but we had to find a way to get along," he said of Jackie Kennedy.

Hill was there, he said, for the happier moments of the first lady's life, from travels around the world to trips to the Cape.

He traveled with her to India, Greece, Pakistan and Italy, and on Sunday chronicled the more amusing times.

"I was thinking, 'How am I gonna get that damn horse back? We were just given two tiger cubs," Hill said of two memorable gifts Kennedy was given from Pakistan and India, respectively.

The moments that stressed out Hill were the ones that delighted his charge the most.

"She was spontaneous. She just wanted to have fun," McCubbin said.

Hill's favorite moments were the quiet ones spent with the Kennedy family and children in Hyannisport, he said in an interview after the talk.

"That's when they really had the opportunity to be themselves," Hill said. "She wanted her children to grow up as normal as possible."

He was also in attendance for many of the family's tragic moments — including infant Patrick's death and the president's assassination, which Hill watched from just feet away.

"I reacted as quickly as I could," he said of his choice to dive onto the car. "You're trained to cover and evacuate."

Reliving those moments for the book, which he and McCubbin began discussing during her work on another book about the Secret Service, "was tough," Hill said. "But it was necessary, I think, for people to understand."

Hill retired from the Secret Service in 1974.