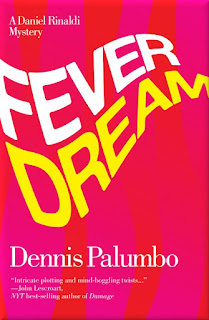 When psychologist Daniel Rinaldi is called from his practice to the scene of a bank robbery, he has no idea just how much trouble is coming his way. As a consultant to the Pittsburgh Police, he aids with traumatized victims at crime scenes and the police need to question the lone survivor of a gory scene where hostages were killed at the bank. Soon Rinaldi is caught in a swirling morass of suspicion, kidnapping, murder, and politics. Death threats against the District Attorney, who is running for governor, further complicate the investigation. Then a reporter asks Rinaldi to accompany him on a journey to question a man who claims to have evidence of corruption by the DA. The reporter wants a psychologist’s take on the honesty of the man. The journey takes Rinaldi into a harrowing situation where he barely escapes with his life, and any evidence may have been lost or destroyed.
Author Dennis Palumbo is a licensed psychotherapist in private practice. Formerly a Hollywood screenwriter, he is the author of the mystery collection From Crime to Crime. His short fiction has appeared in magazines. Fever Dream is his second novel. While the plot of this novel is a complex tale woven from several threads, it is a thoroughly amusing and enjoyable romp. The brisk pace and intelligent writing about the adventurous and heroic psychologist will leave the reader wanting more.