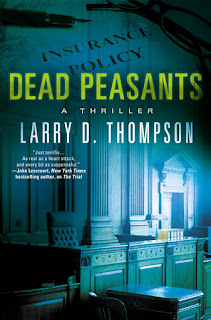 While the title Dead Peasants might bring to mind an medieval take of a murderous Queen, this novel by Larry Thompson is actually a legal thriller that deals with the shady practice of employers taking out insurance policies on individuals who no longer work for their company. The hope is that the employer can then collect on the individual’s death without them ever knowing about it. When high-profile lawyer Jack Bryant begins investigating a series of unexplained deaths, it appears that certain employers have taken the unscrupulous legal shenanigans to deadly lengths.

Bryant, fresh off of a stellar case, has decided to retire, move to his hometown of Forth Worth, and live off the money he’s made. He purchases a mansion and falls in love with his Realtor, but, due to some secret from her past, ignores his advances. But retired life is boring, leading Bryant to open up a pro-bono business. And that is when things begin to go awry. When one case leads them to dead bodies, it appears as if they are due to an employer to collect on his “dead peasants.”

This is a great story for those who like a good lawyer based book that has both courtroom drama and old fashion gum-shoe investigation.  The book is well written and suitable for any audience.