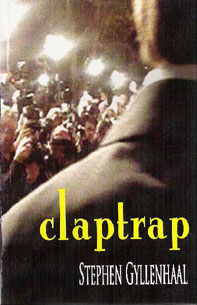 I’m the lowest servant to the stars,
Slave to the leaves.

Everything escapes my cold breath.

My victories were never my own
Just mistakes gone wrong.

I put my shoulder to the thing
And it uncoils
sinks,
perhaps I’ll break like glass,
a billion faux diamonds
pulled into the undertow
or worse,
I’ll run the show.


...  What I discovered while reading Claptrap, though, is a poet in love with language, a love that shines at the heart of every poem. Mr. Gyllenhaal enjoys wordplay, which makes his writing fun to read. The poems are wide-ranging in their subjects—parenthood, family, and social justice among them—and style. Some are improvisatory, some painstakingly crafted.

Mr. Gyllenhaal’s poems are most often self-referential, anecdotal, and drawn from his everyday life. He expresses concern about his relationship with an openly antagonistic neighbor—and his noisy “5am” struggles with his garbage cans—and muses about the world seen through the windshield of his automobile while driving “down Wilshire Blvd./just west of Rodeo Drive.” Hollywood is Mr. Gyllenhaal’s town—the place where he lives and works—hence the subtitle—and Hollywood is a character in this collection.

No book making reference to Hollywood would be complete without making reference to its luxury-car culture, where a woman’s beauty is described, in the poem “Democracy,” as “all past benz/and maseratis.” Hollywood is also a town where wealthy locals are suspicious of a GMC pickup with a “rattling tailgate.” In “Photosynthesis,” the speaker’s suspicion gives way to envy for the young men in the old pickup when he reveals, “Oh, to be that kind of young again/when every oyster spreads its legs for you/and the nails you hit on two by fours/sing out your praise.