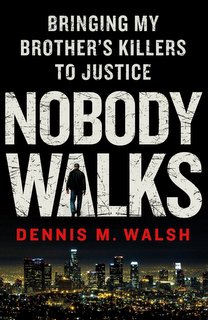 Nobody Walks by Dennis Walsh is a true crime book about the author seeking justice for his brother's murder. The book relates his experiences finding witnesses and encouraging them to contact the police through to the trial and sentencing. While the flow is not that great sometimes making it an easy book to abandon and never finish, the completeness of covering it from when he found out to the sentencing and revealing pertinent information as he found it out does help portray the realistic experiences and emotions.

To some extent Nobody Walks almost seems like some Hollywood script (before they cut out the fluff). The murder victim, Christopher Walsh, was a meth addict and criminal leading his brother to feel it was necessary he get witnesses to come forward or the case would become cold. While he mainly seems determined to have justice through the police and court system, he also reveals his and his brother's struggle to let it happen that way including how he does potentially taint the witnesses and provides cause for mistrial.

Overall Nobody Walks is a good read that provides the unique perspective of the victim's family seeking justice. One of the strengths is that it provides a rather complete recounting of the brother's experiences over the four and a half years from the murder to sentencing. However, this also leads to its weakness of sometimes being redundant or hard to follow and stick to reading it.