Los Aldeanos Documentary: How They Did It 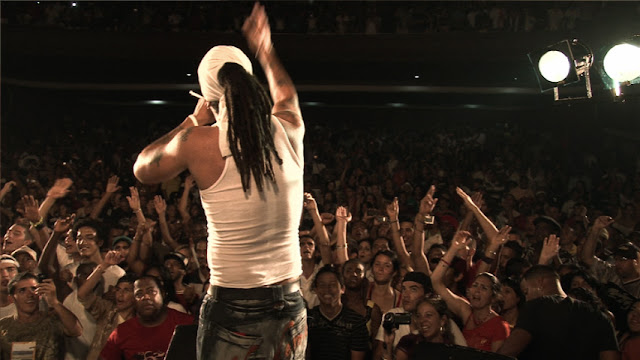 
Los Aldeanos is an underground rap duo based in Havana whose lyrics challenge the status quo of Cuba’s dictatorship. Filmmaker Jesse Acevedo went to Cuba to document their movement at the risk of imprisonment. This is how he did it.

Initially, I went to Cuba to make a film about a Rumba dance competition, not about Los Aldeanos. Three weeks into production, however, someone in my crew invited me to a Los Aldeanos rap concert. Without hesitation, I told him, “No. I don’t like rap!” But he insisted that this would be different than anything I had ever seen and explained, “It is underground, we have to drive one hour outside of the city far away from the police.” Ultimately, I agreed to go out of pure curiosity.

The concert was in an open field on a precarious stage with a few lights and a bad sound system. In spite of only being promoted for a few hours before the show, they managed to gather a crowd of thousands. The energy was electrifying. This was Los Aldeanos, the underground duo who raps about revolution against the Cuban dictatorship. Their music was poetry and spoke to the large population of oppressed youth. For me, it was love at first sight!

That night I went back to my hotel convinced that I had to make a documentary about Los Aldeanos. Three weeks later, I had cobbled together a small production budget for my trip back to Cuba through loans, credit card advances and small gifts from my friends and family.

All I wanted to do was tell the story of Los Aldeanos, two rappers who captivated the hearts of thousands with their music. But in my initial excitement I lost sight of the potential consequences of my actions. The punishments in Cuba for any type of dissent—foreign or native—are severe. If a native Cuban is charged with anti-revolutionary activities, their personal belongings will be confiscated, and they will most likely be sentenced to 20 years in prison. In my case, as a foreigner creating a film that critiques the Cuban government, I could have been potentially imprisoned for a maximum sentence of 15 years.

As such, caution was the name of the game. We had to hide, cut corners and negotiate every shot and interview that we wanted to film for the Los Aldeanos documentary. Some of the methods that we used to shoot and smuggle the video out of Cuba were very dangerous. In order to stay under the radar, our crew used a variety of cameras. Because of their small sizes, we shot with the Sony PD150 DV camera, the Sony HDR-FX1000, and the Panasonic HC-V100. Shooting with small cameras enabled us to easily pass as tourists.

Another great camera for undercover shooting was the Canon 60D, a still photo camera that also takes high quality video. It was very discreet as most people simply thought we were snapping stills. Additional footage was also collected from people, who shot video on their cell phones, point-and-shoot cameras, iPhones—whatever we could get our hands on.

los aldeanosThere were some truly intense moments during the making of this Los Aldeanos documentary, particularly surrounding some of the incendiary interviews. To shoot one of the more dangerous interviews, for example, we drove across Cuba to avoid capture. But when we returned to Havana, there was still the question of how we would smuggle that footage back to the United States.

Because there was more video than we could fit onto flash drives, we took the precaution of partitioning computer hard drives. By partitioning the hard drives, we ensured that the information would be hidden when the computer was booted normally. We then created a dummy account on the computer, so that in the event that security personnel did start up our computer to look for illegal footage, all they would find were tourist photos, which we had downloaded from a random Facebook account.

I remember sitting in that little Havana hotel room, scared, partitioning drives and erasing SD cards and backup drives in case they fell into the wrong hands. And it’s a good thing that we were so careful because some of these same drives were later confiscated by the Cuban police, and my computer was checked at the airport.

Making the documentary was difficult and almost impossible. Not only were the risks taken very real—Alan Gross and countless others in prison would testify to that—but the fear for my crew was like a strange energy around me, which was overwhelming at times! To this day, many of my crew members must remain anonymous in the credits in order to protect themselves and their families.

But, ultimately, all the risks were worth it and made sense because I was following the duo and their music. In my heart, I wanted to make a film that could inform and inspire, and with a little pluck and ingenuity, we pulled it off. VIVA CUBA LIBRE: RAP IS WAR was the result!

Jesse Acevedo is a film director born in Mexico and based in Los Angeles. He has worked on feature films, documentaries, music videos and commercial