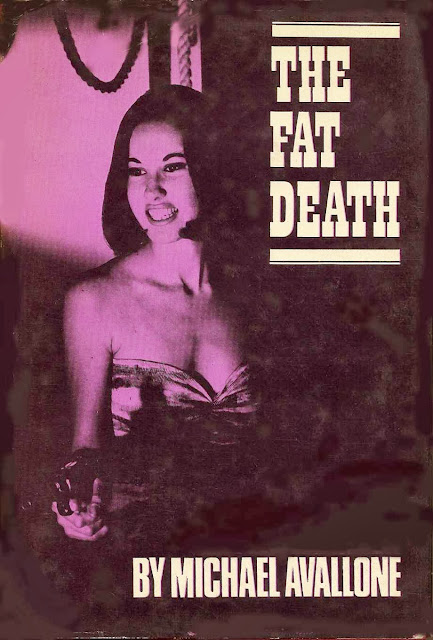 When The Fat Death hit New York, lots of things had already happened to grip the public’s interest. Johnson had finally got tough about civil rights down South, a rapist killer had gone berserk in one ten-block section of Manhattan and a Convair airliner out of La Guardia had ploughed up a residential street in Queens. So it took plenty for The Fat Death to catch on, hold on and keep on holding. It wasn’t easy. But The Fat Death was handled by experts.
The first indication that a giant was walking among us was the leaflet invasion. One shining fall day, the skies over Manhattan rained a million leaflets. No one knows who was the first person to see the message on the square, orange streamers. But after that first one, all of New York that was out walking or leaning out of windows got the message.
It was pure Barnum hokum. Grandstand technique applied to mass saturation. Madison Avenue with wings on. And it worked. God, how it worked. Like babies cried for milk, like tigers need taming, the obese and the overweight of the city, cried for the pie in the sky.
Nobody saw the plane that dropped the leaflets. The Air Patrol had been caught napping. The Civil Defence, worrying about atomic attacks, couldn’t do a damn thing about one small plane unloading a ton of propaganda for a smart operator. Or operators:
BEWARE THE FAT DEATH
DON’T EAT YOURSELF INTO THE GRAVEYARD
WATCH FOR THE SLIM SAVIOUR
Nothing happened for a whole week. The leaflet air-raid was a four-day sensation. The wire services and network news organisations tried to track the thing down. Walter Cronkite said, “This is how it was …” and Douglas Edwards tried to level the monster with humour. But no one came forth; nobody made their purpose known. There was no follow-up to BEWARE THE FAT DEATH. No Slim Saviour came forth to capitalise on the cutest publicity stunt in decades. It was as if Heaven had opened up to deliver a message to the Earth and then forgot about it. But in all the houses on the island of Manhattan, stretching into the home-from-work kitchens of Brooklyn, Queens, the Bronx and Outer Suburbia, the message was repeated. As a joke, as a curiosity, as a come-on for some secret movie about to open with a big campaign to invoke the public interest.
I found a leaflet on the windowsill at my office on West 46th. Fluttered safe between the sash and the top of the air conditioner. But I would have heard about it one way or another. Everybody knew about The Fat Death in New York that week.
Somewhere in the middle of all the commotion, I received a telephone call from a Miss Carstairs of Gloria, Inc., one of the most fashionable dress houses in town. No matter how interesting and bizarre The Fat Death business was, I still earn my coffee and cake as a confidential investigator.
Private Eyes according to Television. Private Detectives according to truth.
Still, as I took a cab downtown that bright October morning, The Fat Death was something to think about.
Like the scared dames in those rich old mansions always say — had I but known.
Still, there’s no sense in kidding myself. Being the kind of restless clown I am, I suppose I would have gone anyway.
I always was a sucker for a mystery.

The Fashion in Flim-Flam

Does She or Doesn’t She

After lunch, which was uninspiring, I phoned Gloria, Inc. from a phone booth in the coffee shop. I was connected with the brittle voice of the unreal receptionist.
She sounded even phonier, courtesy of Alexander Graham Bell. But she got Miss Carstairs on the wire for me.
“Mr. Noon? I’m glad you called back —”
“So am I,” I admitted. “Look. I forgot to get my retainer from you. By the way, I take it Rudolph Valentino left again?”
“Oh — Hugo? Yes. He’s in the Showroom.”
“Good. I’ll tell you where to mail the cheque. And while you’re taking notes, you might give me his home address. And yours. I think I shouldn’t come to the office again. I can scout around the rest of the afternoon and see you tonight.”
She thought about that for a second. “Yes. I agree. Now that Hugo has seen you. Go ahead. I have my datebook before me.”
I pictured that unforgettable face and those long fingers curled around the golden ball point pen. We talked no longer than was necessary. She found out where I slept and I learned that she called Sutton Place home. Hugo Orlando was bivouacked on West End in the Eighties. It figured. I was dealing with fancy clients.
“How about eight o’clock, Miss Carstairs? I ought to have some poop by then.”
“Eight will be fine. Till then, Mr. Noon.”
Something about the way she sounded her “n’s” set a bell off in my head when she hung up. Fine. Noon. Fine — When it came to me it was a logical sequence of thought. Fine. Max Fine. Good old Max with his Ready-to Wear business just a few short blocks away. Max, with his stubby finger on the very pulse of the Garment Industry, could tell me all I might want to know about Gloria, Inc. Max could get information for me wholesale. The more I thought about it the better the notion seemed. Why go tracking down Hugo Orlando in a hurry without some other parts of the picture in focus?
Max Fine was in at two o’clock. I found him sandwiched between two mountainous piles of swatch books, his spectacles sitting on his furrowed forehead. He’d been located on East 36th for as long as I’d known him. He was fat then and he was fatter now. And just as busy. When you had a conversation with Max Fine, it was as if you had opened a window in the Tower of Babel. He must have been born talking. Not even two marriages and seven children had interrupted the zest and zeal that operated Max Fine, Sportswear.
“My friend the detective,” he bellowed in his horse-trading voice when his secretary, a plump blonde named Shelly, ushered me into his inner office.
“Sit down, Eddie baby. Shelly, get the port. This is a drinker. And keep me off the telephone, you hear? Or nobody gets paid around here. Go on, go on. Go, go, go.”
That was Max. His handshake across the swatch book pile was crushing. I made room for myself in a chair and made small small talk to clear away the debris of the eighteen months since I’d seen him. Shelly giggled, disappeared, came back with a bottle and two glasses and disappeared again.