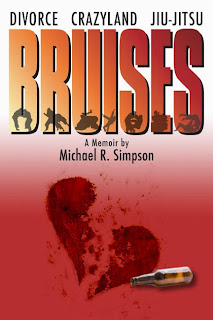 Bruises the novel, is said to be the novel anyone should read that goes through a divorce. Read it before you near the edge of Crazyland. Michael R Simpson lays down the rules—tell-tale signs that indicate what to look out for when you’re knocking on that door —The door to Crazy land. Bruises: Divorce, Crazyland, Jui-Jitsu—the memoir’s now available on Amazon in Kindle and paperback.

Michael, it’s a huge honor to host you on the M.A blog. As you might know by now, M.A strives to bring readers and writers closer together.

As per the normal cliché at the start of most interviews, would you mind giving readers a bit more detail about yourself, your background etc?

Thank you for having me. Here is the Cliff Note version of my background:

• They will have to read Bruises for the rest of the tale.

You took the leap from Engineering to writing, what made you decide to take the leap?

Warning: this is dry boring engineering dribble, the reader is advised to skip to question 3.

There actually was no leap. The cliché is that engineers do math and draft plans. But, in reality before any plans are prepared, engineers prepare reports, a lot of reports; everything from traffic impact studies, to soils reports, to environmental impact studies, grants and drainage studies.

Are you sleeping yet?

Those reports are then used by city planners, developers, and politicians to justify the project (or argue against) and those reports are used by other engineers and disciplines to complete their respective designs. A good engineer must be a good writer; they must be able to convey concepts and physical issues to other professionals and to the average concerned citizen.

What made you decide to write?

In spite of my Mom being an English professor at Cal Poly and my Dad being an elementary school principal, I hated writing in high school and in college. I spent a year trying to appease my English professors with less passive voice and more active voice. I think I got straight “C’s” in my English classes. However, I have always tried to live an adventurous life; one that is interesting; one that is worth living. And what is the point of doing something interesting if you don’t tell someone? I have always liked fact over fiction, and at the age of 45, I believed that I had amassed enough life experiences and adventures to actually have something interesting, funny, and eye-opening to say.

When did you decided to take the leap from just writing into being published?

I met this quirky, eclectic waitress at Red Lobster in 1989. We dated and then didn’t and even hitch hiked home from Mexico. We lost touch and she went on to become a TV actress and write two books. Two years ago, I read those books and sent her a note. Sometimes friends are the greatest motivators. We have been in touch ever since. She encouraged me to write a book. Her name is Lisa Cerasoli and she edited Bruises. 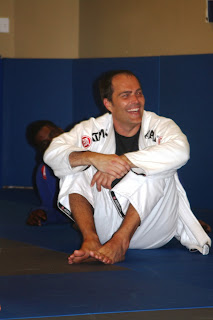 Bruises broaches onto the reality of break up’s, divorce and healing. It’s something I myself can’t comprehend. What exactly made you write it?

I am a bucket list kind of guy. I look out into the world and see all of the possibilities of things that can be done before I die. I pick the best, or at least what I perceive to be the best and then go do them. Writing a book was on that list. I thought about fiction—I even have a few great ideas, but as Mark Twain said, “Truth is stranger than fiction, but it is because Fiction is obliged to stick to the possibilities; Truth isn’t.” So, I wrote about an aspect of my life; one of those bucket list adventures that I’ve been immersed in for about a decade now. For clarity, jiu-jitsu was the bucket list item, not divorce, they just happened at about the same time.

Also, I like the idea that something exists in this world that says “Michael R. Simpson was here and this is who he was.” I mean, I’m an engineer working on hurricane Katrina recovery in New Orleans. My name and signature are on hundreds if not thousands of documents in New Orleans, but that is just my name; it tells the future world very little about me. This book conveys exactly who I am and who I was—the good, bad, funny, crude, insightful, mature, immature, all of it, the entire beautiful mess.

Every writer always gives a piece of him/herself within their story. How close to your own reality is Bruises?

How has the novel been received by readers thus far?

Very well, I am waiting for my Pulitzer as we speak.

Seriously though, I really enjoy hearing about or reading that I made people laugh. And, the reviews and comments that shock me and give me a certain amount of pride are those that either compare my work to a famous writer or simply comment on the voice I used to project my tale or thoughts.

There was a guy from Chicago who came to train at NOLA BJJ (Brazilian Jiu-jitsu of New Orleans). I was out of town, but my friends at the school told him to buy the book. I never met him and he wrote a review that compared Bruises to A Confederacy of Dunces. I mean that is some cool fucking shit. Remember, I was a “C” student.

Another person got my email address and sent me a note regarding a certain part of the book (I don’t want to spoil the part) in which he said “Tears in my eyes, that’s about as good as humor gets, my compliments. I compare it to Twain’s Fenimore Cooper’s Literary Offense —arguably the best very humor ever written.”

How can I not be humbled by these kinds of comparisons?

What was your initial hope for the novel?

I had set out several times to write a book and failed. So, this time I told myself I had to write 40 pages before I let anyone in on the fact that I was writing a book. I also set the goals that, no matter how bad it was, I would finish it and that I would write every day, even if it was only one word.

My initial hope was to just finish it. My second hope was that I could create something that I would be proud of. My third hope was to make enough off of it that it paid for the time I put into it. I can say that I met the first two goals.

Jiu-jitsu does come forth as a very manly sport. It’s understandable that most people lean towards something physical in the hope that it would help them focus, remain real etc when they have to deal with pain. What sets Jiu-jitsu apart from the other sports?

To answer what sets jiu-jitsu apart, I will quote Bruises:

“Before jiu-jitsu, I would go out and run and run and run, sometimes until I puked. The psychology of the running made me feel like I was running away from the problem. But when I ran, I was still thinking about my problems. There was no escape from my own mind, and when I returned from the run, the anger and sadness were still with me. Apparently I was being chased by those fuckers. Other times, I retreated to a bar for the escape. That never worked, in case anyone’s wondering.

As soon as I found jiu-jitsu, I had found a place that was not a bar. And it wasn’t a long run till I puked. This small room with a padded floor and padded walls had become many things to me: my church, my therapist, my gym. When I rolled there was no time to think about problems. When a man is trying to choke you, there is no time for running through all of the bullshit of the day. There is only one task at hand, kill or be killed. The insanity and the desperation of the six-minute round quieted my mind. I was too tired to be angry or sad, and the endorphin buzz created after rolling, whether I was killed or not, left me feeling elated. So, after two hours of mind-quieting six-minute intervals, my mind was reset like a computer that was rebooted. I would leave the gym and all of my problems and emotions seemed to stay there, like the sweat that was left on the mat and in my gi.” 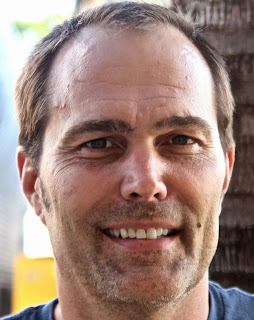 Where can readers connect with you?

I set up a website michaelrsimpson.com. I have a real job, so the website is a work in progress, but I plan on blogging there several times a month.

If they want to meet me in person, I can be found on the mats of NOLA BJJ in New Orleans several times a week and sometimes on the mats of Megaton Brazilian Jiu-jitsu in Phoenix.
And of course, they can purchase the book on Amazon.

Words of wisdom to those in pain?

Go train jiu-jitsu, it has saved many people—both men and women. Life is short and this world is a giant playground. Don’t waste too much time wallowing in sadness. If the pain is divorce, well, welcome to Crazyland, get your passport stamped and get out as quickly as possible.
Thanks so much for sharing yourself with M.A’s loyal following. We wish you well in all your future endeavours.
Thank you so much for having me and allowing me to discuss my book.


Reposted from My Addiction