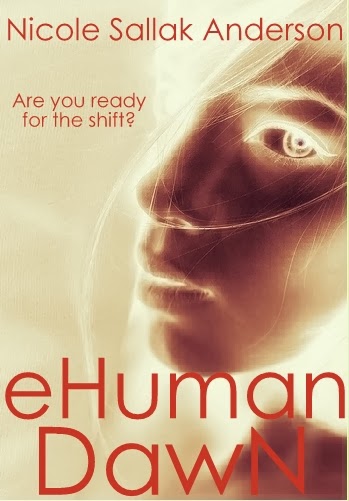 eHumans join forces against the World Government in an effort to save the cities of Neuro before eHumanity is powered down.
The Great Shift is coming.... are you ready to jump?

Fast forward to the year 2242--a world in which death, disease, war and famine have been conquered, and where everything, including humans, are devices on Neuro, a complex network operating system that is controlled via human thought. Adam Winter has lived for nearly two hundred years in an eHuman body--a man of metal, fiber optics and plastic, on a world where no one dies and no one is born. Paradise on earth--until Adam discovers that the World Government is cutting power to entire cities, and his own city is on the list!

Trapped in a body that must recharge on the network, Adam is swept up into the underworld of an eHuman anti World Government resistance, led by Dawn, the very first eHuman created. While the Resistance wages war against those in power, Dawn reveals to Adam a shocking secret about their past that not only bonds them together, but is also the Resistance’s ticket to gaining control over Neuro and taking down the World Government once and for all. Caught between the past and the future, Adam must rise up, claim his inheritance, and face his destiny-- before eHumanity is powered down, forever.


Nicole Sallak Anderson is a Computer Science graduate from Purdue University. She developed encryption and network security software for years, which inspired both the storyline and the science behind eHuman Dawning. She currently lives with her husband and two teenaged sons on two acres in the Santa Cruz mountains of Northern California, where she indulges in a variety of homesteading hobbies, from beekeeping and raising chickens and goats, to gardening, canning, spinning, and knitting.