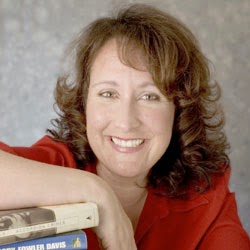 For years New York publishers (also called legacy publishing or corporate publishing) were at the top of the publishing food chain. They decided which books were released and when. They created books that started pop-culture trends and, in a word, they ruled the world. But as we've evolved through the publishing mecca and other, viable options presented themselves, the issue of how to publish and whether the big New York publishers still control the industry is very debatable. Even bigger are the issues surrounding what, if any, value these publishers bring to the author. Great industry equalizers have been eBooks, eReaders and, of course, the often-hated and always mysterious Amazon.

During Digital Book World in New York, this topic was pretty heavily discussed. In fact, Dana Beth Weinberg presented on this very issue, why publishers should be worried about losing their author base. The Indie Math, as she calls it, would show that authors who have self-published could potentially earn more money than if they had published traditionally: http://www.amarketingexpert.com/wp-content/uploads/2014/01/2014-01-15-10.55.41.jpg
The real problem with this is that while publishers are aware of the options that authors have, they still do not feel that their existence is in jeopardy. Or, most of them don't. I have spoken with a lot of publishing colleagues who are in-house at publishers who completely get that the axis of power has shifted. The author now holds all the cards. Let's celebrate that for a moment because I remember when I was first in this industry and self-publishing (now renamed the ever-trendy indie publishing) was the little stepchild never invited to the table. If you self-published you were considered somewhat akin to a bottom-dweller. Sorry if that's harsh, but it's the truth. New York looked down at self-publishing, and I know this firsthand because I've always self-published and, frankly, I've been proud to jump on this trend. When I started my business some thirteen years ago, someone in publishing asked me why I'd even bother to spend time on the self-published book or promote the author of such a tome. My answer was always the same: don't judge what you don't know and even if you know it, don't judge. You never know where the great ideas will come from or the things, like print-on-demand or the initially poo-pooed Kindle e-Reader, that will change the world.

So, back to my original question: are the New York publishers still relevant? The answer is: "it depends" and often, just flat-out "no." I think it's time that we offered publishers a glimpse of the future, a future that is not all too far off and where they have to prove their relevance to authors. Everything that was once exclusive to a publisher has become much more accessible to authors. If you're trying to decide if you should wait for a publisher, perhaps it's time to reconsider that question altogether.

Let's have a look at where publishers have succeeded in the past and how that's changed:

Book Production: At some point during Digital Book World one of the speakers showed a survey that indicated that authors generally felt that publishers could do a better job of creating a marketable book than they could. They worried about things like editing, cover design and general market segmentation. Many authors still feel publishers can do a better job, but guess what? They can't. We work with a number of high quality self-published titles and, for most of them, I'd dare you to find something about them that screams self-published. These days, there is a font of information out there for authors who are willing to educate themselves enough. The competitive advantage is in the hands of the author who can go the distance with this and, if you do it on your own, you could end up making a lot more money.

The Ring of Fire: This is perhaps one area that scores an advantage for the publisher, and it's something I call the ring of fire. This is the process by which a book is filtered through the publisher's system and a process that really helps educate authors and gets them ready for the hardcore process that is publishing. During this process you'll have an editor requesting changes, you'll be tinkering and rewriting until they feel it's perfect enough for publication. It's hard and often humbling and it helps an author realize how tough it is out there, I mean really tough. With 3,500 books published every day in this country, be good or be gone, and remember: hope is not a marketing plan.

Media and Marketing: Most often authors feel like this is where publishers succeed, and for the authors who actually get some marketing for their book, this is probably true. I know a lot of very talented publicity people who work in-house and believe me when I say that they know their stuff. The problem is this: there isn't always an aggressive marketing and publicity budget assigned to each book. In almost 90% of the cases, authors have to do their own marketing.

Money: The all-important driver behind book publishing is the bigger question: "Will they make any money?" The challenge with this question is that no one knows, at least not with any certainty. Publishers (understandably) have become more risk averse, publishing titles by authors who have huge followings or who are celebrities. This becomes somewhat of a challenge for the rest of us, especially if you're considered a newbie, no-brand, non-following author - which is, candidly, most of us. Is the money really better on the other side? What about author advances and such? Well, as the link shows above, the advances may not bear out, given the higher sales percentage you can get self-publishing your book. And advances have also shrunk in recent years, which is, again, understandable. The caveat to this is that you can embrace the indie revolution, and forgo traditional but you have to think big time. Especially if you're a newbie. By "big time" I don't mean hoping for a movie deal, but rather holding your book up to a set of very high quality standards. So, that's the long answer. The short is answer is: yes, you can make as much money or more by self-publishing, but you have to do it right.

Cachet: The cachet of being published by a big house once was a big deal and I think that for many this still holds true. The media was sensitive to self-published books and often didn't feature them, not because they didn't want to or had a bias against them, but because they were, in a word: garbage. But now that the bar is being raised and authors are beginning to understand the expectation of the industry, this is changing. So that cachet isn't really having the publisher's name on the book, it's about having a book that looks like it came from a Simon & Schuster or Random House. Get the picture?

So in looking at all of the above, authors have to wonder why on earth they'd even go with a big house. Yes, why indeed? Now publishers, realizing that there is money to be made in self-publishing, are offering self-publishing as an extension of their brand and this creates even more confusion. Penguin bought Author Solutions but if you publish with Author Solutions it does not, in any way, make you a Penguin author. Problem is, many authors think that's the case. In fact, last week I got a book sent to me by an author who said he was published by Penguin. He wasn't. It was Author Solutions. When I attempted to explain this to him he became upset and thought I was selling him some misaligned bag of goods.

I get that buying Author Solutions was probably a great business decision for Penguin. But as we see more and more of this, the issue of publisher brands is going to get even murkier and hard to define. As they find ways to remain relevant, despite the fact that the earth is shifting beneath them (and often in the author's favor), it's becoming more and more difficult to survive.
Maybe instead of trying to find ways to expand their brand into self-publishing, these publishing houses should be looking at ways to keep their traditional arms more attractive to the author. One has to wonder if, at some point, savvy authors will weigh a potential contract against going it on their own for more profit and more creative license, and I think that this is a big point that publishers are missing.

The problem in the industry, and I would say that this is the biggest problem, is that so many still don't get it. Donald Maass wrote a piece for Writer Unboxed last week that illuminates this point with stunning clarity: the industry does not get it. They see this as a class issue (at some point in his piece Maass refers to the self-published group as "Freight class") (http://writerunboxed.com/2014/02/05/the-new-class-system/). It was infuriating and frightening at the same time. Frightening because despite this self-publishing revolution, no one wants publishers to go away. We do, however, want them to get it. The revolution has arrived, it's knocking on their door and no matter how long they decide to bury their heads in the sand or write blogs about the class distinction and other outdated notions, it is taking over and changing the way we see the industry.

People keep comparing publishing to the music industry, but I think that's wrong. Sure, there are similarities in that they both faced changes they weren't willing to deal with, but the issue of publishing goes much deeper than that. Technically, we're talking about an industry that, if it doesn't change, could face extinction. You can produce a book for a lot less than you can produce an album and with far fewer people. Elements of the music industry will never go away, but big players in publishing might and that's a shame.

When faced with a changing business model, you can either learn how to be a part of the publishing revolution - or step aside and let the revolution take over.