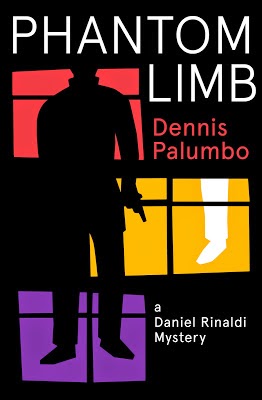 Dennis Palumbo now has four thrillers (as of September 1, 2014) in the Daniel Rinaldi mysteries set in Pittsburgh, where he grew up. That is one of the features that drew me to the series since I lived there happily for a number of years. It isn't necessary to be familiar with Pittsburgh; but if you are, it's fun to recognize the locations the author describes.

Daniel Rinaldi is a psychologist who reluctantly gets called in by the police from time to time, to help with difficult cases needing his skills. His specialty is traumatized victims of crime including sexual assault. But never fear. Since author Dennis Palumbo is also a psychologist in real life, he never goes too far with the violence or the sex. The focus is on one heck of a good story.

In Phantom Limb, things start off with a bang. Set in Pittsburgh, this roller coaster ride of a thriller is a worthy fourth entry into the series. Hollywood Starlet Lisa Harland now married to a very wealthy older man is kidnapped as she leaves her session with Rinaldi, who of course gets knocked out. Why does the kidnapper insist on Dr. Rinaldi being the one to make the ransom drop?

I tend not to tell too much of the story since part of the fun of thrillers is the surprise and unexpected plot twists. And Palumbo precisely lays out the various story lines, carefully pulling them together at the end. Except, of course, those things that MIGHT be part of the next book.

If you start with the first book in the series, you will feel like the reoccurring secondary characters are old friends. Palumbo has filled his stories with people that are memorable, quirky, cranky, and fun.

I read lots of thrillers and have to say that Dennis Palumbo is one of the best writers in the genre and he gets better with every new entry in this series.

Bottom Line: If you read and enjoy thrillers, add Dennis Palumbo to your list of authors to follow. You won't be disappointed! It's not necessary, but I would still suggest reading the other three books first. HIGHLY RECOMMENDED.

Dennis Palumbo is a writer and licensed psychotherapist. His first Daniel Rinaldi mystery, Mirror Image was published in 2010, followed by Fever Dream in 2011, and Night Terrors in 2013. He was formerly a Hollywood screenwriter and his credits include the feature film My Favorite Year. He also wrote for Welcome Back, Kotter.