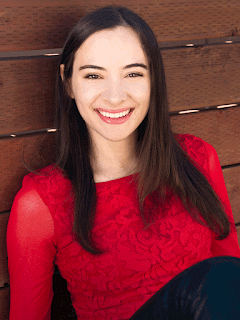 With a key role in “Domesticated” (now playing at Steppenwolf Theatre), two films currently screening on the festival circuit, and an audition for a Tracy Letts play, Melanie Neilan has 2016 at her feet.

“In "Domesticated," a drama with a ton of comedy, I play an über-smart, extremely acidic, sarcastic teenager. One of my favorite scenes is when I impulsively throw a bowl of oranges off the table to express my anger at my dad,” she said. “I have learned so much from writer/director Bruce Norris.

“I am currently attached to three film projects, one, a short film that deals with a hard-hitting and relevant social issue that the filmmakers want to develop into a full-length feature. My manager, Nancy Scanlon, is developing, under the banner of her company Au Courant, a biopic set in the Victorian era, and I will play a starlet. My current films include My First Love, in which my character transfers her love notes on Hostess Cup Cakes.”

A purple belt in karate, Melanie has studied since childhood at the Irina Makkai Classical Ballet & Dance School in Highland Park. Dividing her time between Chicago and Los Angeles, she trains in ballet in Santa Monica. Melanie was a founding ensemble member of A Red Orchid Youth Ensemble. “I look up to Michael Shannon, who is a founding father of A Red Orchid Theatre, as he has always been one of my longtime acting heroes, and I admire so much his current work in ‘Boardwalk Empire,’” she shared.

Her greatest hero of all and lifelong mentor, however, is her grandmother Merle Reskin, beloved Chicago arts patron, actress, and singer. Merle, an actress and singer who, along with her husband Harold, saved the historic Blackstone Theatre, which is now a part of DePaul University and bears her name.

She was in attendance at the opening night of “Domesticated,” with her daughter, Melanie’s mother Leslie Neilan.

“Merle played the role of Ensign Janet MacGregor in the original Broadway cast of ‘South Pacific.’” This wasn’t a road show either; it was the real deal,” Leslie said. “I remember when Melanie was five, my mom was being presented with an award for philanthropy and she brought Melanie up onstage, too. Melanie looked at the audience and gave a royal wave. I knew then that she loved being in front of audiences.”

Melanie says there’s something particularly terrific about this strong bond between the women in her family. She cites her grandmother as “the potent force driving my love of the craft; without her stories and passion for the arts, I would not have discovered the world of theatre in quite the same way. And her humor always keeps me laughing.”

She is similarly influenced by mom, Leslie: “My mother’s turn headlong into the field of producing is one of the most inspirational things I have ever seen. She has a real gift for storytelling and [is] unbelievably insightful. I hope to be a part of a horror film she and my agent Nancy Scanlon hope to produce.”

Leslie Neilan will be producing her first feature film this year based on a story she has written called The Book of Leah. She and Alan Roth, recipient of an Academy of Motion Picture Arts and Sciences fellowship, are the screenwriters. She has two other children, Sean and Spencer, who are both engineers.

Looking forward to 2016, Melanie hopes to spend more time in Los Angeles, particularly during pilot season. “I want to continue to work in theatre and film, and break into television. I’d love to find more ways to express my love for languages, singing, dancing, unicycling and yodeling.” Yodeling? “Most of my friends know I yodel, so if I see them across the street, I yodel, and they know it could be no one else but me,” Melanie said. “Yodeling is a random and surprising thing. When I do it, it gives me great joy.”