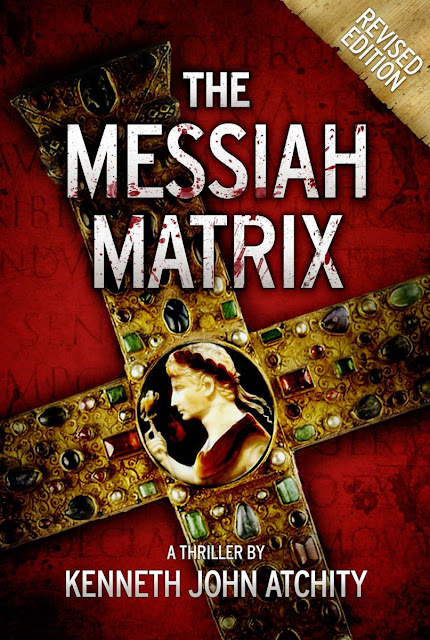 Kenneth Atchity's The Messiah Matrix is one of those fascinating books—a rara avis--that works on many levels including those that, ironically, the writer may not have been aware of in the beginning. The story of the discovery that the historical Jesus was really the Roman Emperor Augustus (neé Octavian), a secret kept under wraps by the Society of Jesus acting, as many Jesuits do, in the best bad manners of 19th-century "novels of sensation," The Messiah Matrix is the latest in a stream of fiction popularized by The Da Vinci Code though having a pedigree among a number of so-called heretical novels, previously having garnering fanfare in Irving Wallace's 1972 novel, The Word.

What separates Atchity's book from the tiresome vulgate of the roman historique is the firmness of Atchity's unadorned style, a style seemingly embedded in Atchity's erudition as a Classicist. (If ever one wanted to study good English prose written by someone well-versed in highly inflected languages such as Attic Greek or Classical Latin, without having to grapple with Chase and Phillips' Introduction to Greek or Gildersleeve's daunting grammar tome, then Atchity is your meat.) Also, even though Dr. Atchity's bona fides as a well-traveled academician are beyond me, I can certainly appreciate a fellow who apparently knows his way around Rome when writing about Rome. (I imagine Atchity could blindly find his way from the Mausoleum of Augustus on the east bank of the Tiber River to the Temple of Jupiter near where the Via Flaminia pierces the center of The Eternal City.)

With plucky heroes such as devout archaeologist Emily Scelba and quavering priest Father Ryan, both desperately fighting the forces of darkness (and trying to stay one step ahead of a Holy See that would preserve the myth of our well-known Χριστος as well as Jesuits hell-bent—literally—on bringing on the advent of the Deified Augustus as the true Christ—The Messiah Matrix lives up to its mission, providing thrills couched in provocative questions.

Considering the already sturdy tumulus of propaganda built up around the too sordidly human Octavian, who, in 42 B.C. became divi filius—"Son of God," we should not decry a few more harmless pieces of learned public relations. If Augustus and Livia had no biological children, they were blessed by a million minions of spin. The hype began with the Res Gestae Divi Augusti, probably composed in A.D. 13-76, begun a year before the death of the man significantly known as Sebastos (Reverend) but also as Imperator (General). This sort of conflation of Messiah and Master-of-Arms is a delightful hagiographic touch sure to please revolutionaries, apostates, and wise novelists looking to expand a genre designed to thrill and excite with liberal dashes of carnality and intellectualism. (If Kissinger was right about power being the ultimate aphrodisiac, then what better Viagra than a peek into the Mysteries, whether Eleusinian, Gnostic, or otherwise?)

Unlike many conventional thrillers, and more like the priapic Old Comedy of the Greeks, The Messiah Matrix seems less a plotted thing than a progression of heterogeneous episodes. The book deftly combines mythical patterns of threat, capture, escape, and pursuit—usually against terrible odds for success and under circumstances of hideous death. This is the formula of Edgar Rice Burroughs, epigone himself of many purple patches of narrative. The formula in The Messiah Matrix inheres with religious hysteria and a baroque melodrama that would have made Matthew "Monk" Lewis salivate. The book accelerates from the discovery of an aureus whose coin face shows a thorn-crowned Augustus to a series of Perilous Pauline chases through an underworld that is both heady and prosaic as the novel hits all the storytelling points required by a heroic descent in, and daring extrication from, chthonic imprisonment. (Here Atchity's bracingly correct prose enmeshes every subterranean action and texture in phrasing precisely capturing the sights, sounds, and smells of a marathon race out of Acheron.)

Deep characterization, stunning surprises, and piquant variations are not what The Messiah Matrix is about—on the seemingly intended surface, that is. Yet, a deeper reading of the book strangely teases and tantalizes. The story releases intermittent billows of ironic incense, redolent of what author Atchity may have been satirically intending all along. For example, not just another Lara Croft: Tomb Raider, Emily is, perhaps, an ironical avatar of Dan Brown's insipid "sacred feminine," glittering with the aegis of Athena (though, in the modern vein, hardly maintaining the chastity of an Artemis). Neither is the ineluctably defrocked young priest Father Ryan able to surprise and astonish by any veer away from a bathetic plunge into Emily's arms. (A last minute restoration of Ryan's Vow of Celibacy would have been refreshing, but, significantly, out of the book's intriguing ironies and sometimes caustic satire, an example of which is the terms of the Emily/Priest love affair. The couple's passions are relayed as effulgently as one might find in any conventional nouvelle de romancier, with worlds sundered by the power of lascivious consummation and universes imploding as long-repressed passions flare from the frisson of suspenseful expectation to the fission of the first consummative clinch. Considering, again, Atchity's possibly ironic position to The Messiah Matrix, we might wonder if the author keeping a straight face? Our irrepressible protagonists' love is apparently real and reciprocal, fine in itself, but seemingly forced as far as the fulsome descriptiveness goes. Fortunately, all this verbiage about "electricity" between our stalwarts does not, thank Augustus, lead to an actual scene of faradized fornication.)

Without revealing too much of The Messiah Matrix, while nevertheless suggesting that everything will, like a sacral unveiling, be revealed, this critic would not suggest anyone analyze too closely Atchity's New Advent. Those left dripping at the end of The Da Vinci Code will find no such simple crudities in Atchity's immeasurably more intelligent book. Nevertheless, some relatively simple logico-mathematical formulations—and a bit of reliance on Aristotle's Metaphysics—should be sufficient to dismantle the nascent New Post-Christian Revealed Faith. When the Big News is revealed—again, in decidedly ironic, one might say, satirical terms—at the end of the novel, one can happily grin at the book's conveyance of such an unworkable faith and any attendant ecclesia based thereupon. One has to consider the very nature of the propagandizing, manipulative, disingenuous Emperor Augustus. All this makes for a denouement and coup de theatre that are deliciously wry. How else is one to take the scene where the offspring of Emily and Father Ryan proclaims Duh Word? Is the litany some half-baked Paul Kurtz zeppelin of buncombe? Or is this scene and its material legitimately felt by the author, as an admittedly respectable secular humanist manifesto? Again, however, Atchity intrigues and inveigles, ending the book with a line that seems like a species of oblique, crafty, and adroit Menippean satire, when the rosy-cheeked young minister says, "Don't you know that I must be about the emperor's business?" (Note "emperor" and its tie-back to imperator, or general. Bravo, Atchity! This line is the sort of ingenious, lapidary reference that would have fit right into David Seltzer's The Omen.)

The Messiah Matrix should not convince anyone that it was only some Joe Jerusalem who died on the cross, about as divine as the two thieves flanking the Holy Rood. However, like many mystery stories whose contrivances are satisfyingly temporary but potent, the novel will entertain. This new genre of rejecting Jesus as what the faithful know as Jesus, and fad of delegitimizing Christianity as True Writ, has already spawned, like Scylla and Charybdis, two masterpieces, where denunciations of Christ follow the apothegm indicating that a vigorous rejection of "Him" only engenders a vigorous affirmation. (This paradox was, of course, part of the genuine charm of Flannery O'Connor's Wise Blood.) Nor is The Messiah Matrix in the genuinely iconoclastic, apocalyptic vein of a novel like James Blish's Black Easter, where magic, working according to physical principles, is used to unleash, for one night, the entire Hosts of Hell, leading, literally, to God's death and the renascence of Dis on Earth. (Take that, Rosemary's Baby!) As in much fiction, the so-called proofs wind up relying more on manipulates than metaphysics, with whatever might be eligible for introduction as author Atchity's "apostasy" reliant, as most are, on a typically inadequate materialism.

As Blaise Pascal wrote in his Pensees:

"I wonder at the hardihood with which such persons undertake to talk about God. Proving God's works from Nature…only gives their readers grounds for thinking that the proofs of our religion are very weak…It is a remarkable fact that no canonical writer has ever used Nature to prove God."

Nevertheless, despite what a casual reader might perceive as a straightforward recit, one utilizing, notably in this instance, proversa oratoria as a stylistic fundament, not a mere flourish, another view is that Atchity has really contrived a sort of mirthful roman noir, a book that may be an inversion of the Dan Brown-type it seems to follow.

If so, The Messiah Matrix resembles some sort of explication of a heresy that really wants to make fun of heresy. In terms of the sacred, venerable Augustus' depiction of how he wished posterity to view him and the "high points of his reign" (cf. Rex Wallace's book), and any charging of religious significance because of the adjectival use of "augustus," The Messiah Matrix actually reduces the first Roman emperor back to being merely a dude named Octavian. Who was that? A canny, manipulative opportunist, favored by a Senate willing to indiscriminately convey influence and de facto tyranny. A chap for whom the cognomen Augustus was undeserved, a golden crown for someone not even deserving a dented tin fillet.

This Augustus was, then, a very base fellow. Neither the Latin version of the bronze inscriptions, Monumentum Ancyranum, nor the version installed at Ancyra (modern Turkish Ankira), the capital of Roman Galatia, dare to describe the real man, who, as a private citizen, unconstitutionally raised an army and, on gaining power, killed his political opponents, although those crimes were spun as pardons.

The Messiah Matrix is a distinguished, exceedingly rich book. Get it.