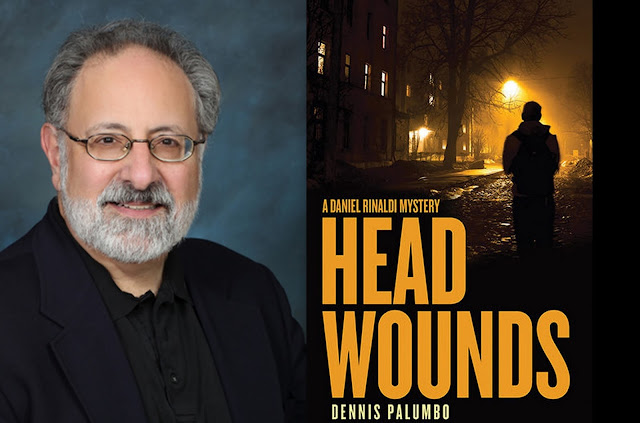 Accomplished writer Dennis Palumbo calls his latest novel “Head Wounds” and the grim title should serve as a warning. This psychological thriller has some fine language and a strong narrative pull that keeps the pages turning, but the series of crimes that occur are unnerving.

What lightens the book are Mr. Palumbo’s descriptions of its Pittsburgh setting, interesting interpretations of abnormal psychology, and its likable main character, Daniel Rinaldi.

Dan may bring to mind superstar novelist Jonathan Kellerman’s longtime hero, Alex Delaware. Both Mr. Kellerman and Mr. Palumbo trained as therapists and both of their creations are clinical psychologists who consult for their local police departments. While Alex investigates crimes with irrepressible detective Milo Sturgis, Dan is assisted here by retired FBI profiler Lyle Barnes and a current agent on leave, the sexy Gloria Reese.

The story starts in Dan’s home on Grandview Avenue. After a long night filled with harrowing incidents, it becomes clear that he is the target of a diabolical villain. Over 330 pages “a brilliant psychopath from Blackridge” named Sebastian Maddox uses cameras, klieg lights, tracking devices, C-4, guns, talking drones, GPS, subdural implants and a mannequin to make Dan suffer. Maddox ‘bots Dan’s cell and laptop and hacks into patient files and the FBI’s computers. It all seems implausible, except who knows what’s available online these days, or even at RadioShack.

Maddox compiles a kill list of people close to Dan that includes relatives, clients and a “features writer from the Post-Gazette.”

The psychologist is able to deduce where Maddox will strike next based on the killer’s need for symmetry, “one of the ways his mind attempts to order itself.” Maddox also has erotomania, “a delusional disorder in which a person believes another person is in love with them.” Turns out that person is Dan’s late wife, Barbara, who was a linguistics professor at Pitt.

This reference to the University of Pittsburgh is just one of many. Mr. Palumbo calls the Cathedral of Learning “regal and timeless” and describes “the ponderous, chilled embrace of Medieval-style masonry.”

People in the story wear Pitt Panthers and Steelers sweatshirts, drive on the parkway, and get their news from KDKA. Mr. Palumbo often does more than just mention Pittsburgh landmarks; he characterizes the city in both positive and negative ways.

He brands the area as vaguely racist, “where ethnic pride and ethnic prejudice lived side by side.” The “classic Pittsburgh accent” comes up and words such as slippy, jagoff and yinz are included: “Slang that you still hear sometimes, even as the Steel City continues to morph from blue-collar, industrial town into a gentrified, white-collar hub of business and technology.”

The rivers also get a nod. One foul deed takes place on the Ohio in McKees Rocks while on the Mon, off Second Avenue, Mr. Palumbo has invented a bar that would be fun to have in Pittsburgh. This converted coal barge named Noah’s Ark is run by Dan’s former patient, Noah, whose band is called Flat Affect because all the members are on meds.

As “Head Wounds” rolls to its clever, crazy gothic conclusion, no one could accuse Mr. Palumbo of being flat. This is the fifth book in his Daniel Rinaldi series and most readers will hope Dan lives to see a sixth.