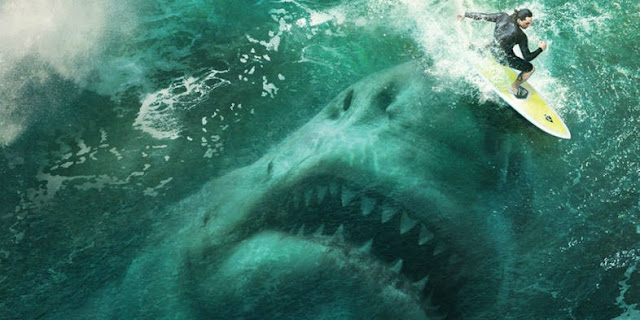 The original author of The Meg has seen the trailers for the upcoming Jason Statham shark movie based on his books, and has been suitably impressed. Posting on social media, writer Steve Alten confirms that the trailers are complete and that they are “excellent.” He also gives a reason for the delay in their release and teases the arrival of the first official poster, which he promises is nothing like the covers of his novels.

The film is based on Alten’s first novel about the giant Megalodon shark who menaces divers and scientists. It was published in 1997 and titled Meg: A Novel of Deep Terror. The book spawned an ongoing franchise, with the sixth novel due later this year. A film was originally mooted for the first book almost as soon as it was published, but remained in development hell for many years. Production only moved forward significantly when Jason Statham was confirmed as the lead, and filming started in 2016. It was originally marked for a theatrical release on March 2, 2018, but was then delayed to a summer release in August. There have been some on-set images and photos, but no official footage has yet been seen. However the trailer was recently tapped to drop sometime during April, giving us our first glimpse of the massive shark in action.

“I’ve actually seen the two trailers and they are excellent. The powers-that-be decided it would be best to delay their launch from late March until April. The reason has to do with analytics and if the viewing audience sees a trailer too early and then the movie comes out much later, they are left with a false impression that the movie had already been out… What is important is that the trailers are finished and they WILL come out in April…. Also debuting in April will be the movie poster. I’ve seen the mock-up and I really like it. It features an angle of the MEG that has never appeared on one of my MEG covers.”

While it’s unlikely that Alten would openly criticize any of the marketing at the moment, it is encouraging that he praises what he’s seen so far. There is some speculation that the first trailer may arrive around the same time as monster movie Rampage opens in theaters. They are both Warner Bros. movies and it would make sense to promote The Meg to the same audience.

While sharks continue to dominate on home media and TV screens, with the likes of the sixth Sharknado movie and Deep Blue Sea 2, The Meg stands alone this year as a bigger-budgeted film of this particular sub-genre and that may work well in its favor. Jon Turteltaub (National Treasure) is a solid director of action movies, and Statham is sure to bring his own reliable brand of thrills and humor to the story, as the heroic deep sea diver Jonas Taylor. The cast also includes Ruby Rose (John Wick: Chapter Three) and Rainn Wilson (The Office).