Remember When Tim Burton Almost Directed a Ripley's Believe It or Not! Movie? 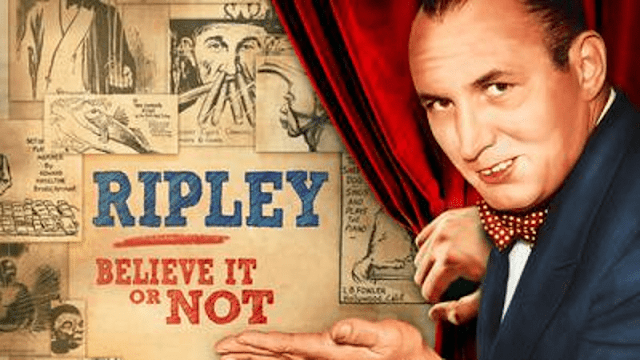 Director, animator, writer, and artist Tim Burton—who has directed nearly 20 features in the past 30 years—has brought scores of darkly stylish (and often lovable) characters from his own imagination to the big screen via cult hits and blockbuster movies alike. While hard work and pure luck have helped in getting many of those projects off the ground, even Burton hasn’t managed to successfully realize every one of his creative visions. Let’s all settle in for the moonlit tale of the Burton film that almost was: Ripley’s Believe It or Not!, about the cartoonist, adventurer, reporter, explorer, and weirdness-expert Robert Ripley.

Ripley was a lifelong entertainer and seeker of mind-bending oddities. He shared his discoveries from around the globe (such as his “personal collections of beer steins, shrunken heads, tribal masks, and ‘pranks of nature,’ like a two-headed calf,” according to The New York Times) through his long-running hit radio program, newspaper panel, TV show, and the seven Odditorium museums he founded before he passed away on May 27, 1949 (three days after suffering a heart attack on live television).
More from mental floss studios
This pottery is mesmerizing

So beloved was Ripley in his day that in 1936 he was voted the most popular man in America by newspaper readers and took the top spot on a Boys Club of New York poll asking kids who they most wanted to be like when they grew up—even besting then-President FDR.


The trademark of his legacy, however—which lives on in Ripley’s Believe It Or Not! museums around the word—is his dedicated celebration of the world’s "freaks," a term to which Burton relates. As the Oscar-nominated filmmaker told the Associated Press in 1990:

"I think there's a necessity for people to categorize. I think it helps make them comfortable. And some of the weirdest people I've known get it the worst. If people can't put you into a category, they're inclined to just write you off as a freak."

Ripley and Burton shared not just a fascination for curious personas but a reverence and respect for them, too—making the task of portraying the lifelong work of Ripley one perfectly suited to Burton. And in 2007, it was all about to happen.

Deadline reported that the film's "locales were exotic and the sights were unbelievable.” The project also had funnyman Jim Carrey signed on as the title character, a script from Scott Alexander and Larry Karaszewski (who had co-written Burton’s Ed Wood and Milos Forman's Man on the Moon), and a $175 million budget.

But then, about a week before shooting was scheduled to begin, Paramount pulled the plug.

Burton told the Los Angeles Times that he was "pretty devastated" when Paramount shelved the project, especially after nearly all of the pre-production work—including Burton personally scouting filming locations in China—was already completed. "I know it's a business," Burton said at the time. "But for those of us working on the film, you get excited, and it's an art form. They should feel lucky that you treat it like an art form."

The film was supposedly stalled due to conflicting ideas about the film's execution; specifically, Deadline noted, “the picture halted when Carrey came up with some ideas for a major overhaul. While Burton liked those ideas, stopping the film’s momentum cost the film its director,” with Burton promptly heading off to work on 2007’s Oscar-winning Sweeney Todd: The Demon Barber of Fleet Street.

That same year, Carrey explained to the Milwaukee Journal Sentinel that he’d had qualms about where the project was headed: "Tim [Burton] was headed in one direction and that wasn't where I wanted to be. And we talked about it and figured we needed more time. But it's going to happen and it's going to be really cool."

Paramount did attempt to revive the project a few years later, with some staffing changes; as Burton had moved on, Chris Columbus (Mrs. Doubtfire, Harry Potter and the Sorcerer's Stone) was offered the chance to direct, with a new script by John Collee (Master and Commander: The Far Side of the World, Happy Feet) but that version also stalled.

In 2011, news surfaced that the studio was once again attempting to produce the project, this time hiring Oscar-winning screenwriter Eric Roth (Forrest Gump) "to do a complete rewrite overhaul." Though there's been no news of its development since, Carrey was still attached as its star.

Burton, on the other hand, seems to have permanently moved on—though he has had plenty of other opportunities to explore the complexities of beloved oddballs with upcoming projects like Miss Peregrine's Home for Peculiar Children and the highly anticipated Beetlejuice sequel.

Email ThisBlogThis!Share to TwitterShare to FacebookShare to Pinterest
Labels: filmmaking, Jim Carrey, paramount, Ripley's Beleive it or Not, Tim Burton