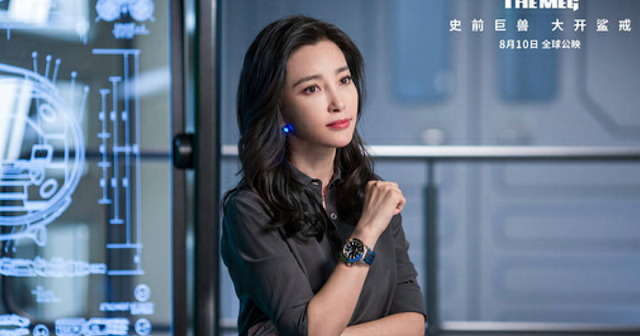 After battling zombies and giant robots in Hollywood blockbusters like Resident Evil: Retribution (2012) and Transformers: Age Of Extinction (2014), Chinese actress Li Bingbing, 45, now takes on a 75-foot-long shark known as the Megalodon alongside English actor Jason Statham in The Meg.

When a deep-sea submersible that is part of an international undersea observation programme is attacked by a creature and lies disabled at the bottom of the deepest part of the Pacific Ocean, a former deep-sea rescue diver (Statham) joins forces with the daughter (Li) of a visionary Chinese oceanographer to save the trapped crew.

What attracted you to The Meg?

It was a total challenge for me. It challenged my mind, my body and my fears...And I love the adrenaline rush. But the real reason is that I got the chance to pilot a glider for the first time.
The title creature is a mammoth prehistoric shark that threatens the crew aboard an oceanic research vessel.

How do you feel about sharks?

Sharks have lived on Earth over 500 million years. Before beginning work on The Meg, I thought that sharks ate humans. But I learnt that sharks eat only invertebrates and fish.

What kind of training did you do for the film?

I did a lot of research on shark habits. I also trained in scuba diving.

What was it like being in the water - or underwater - for such a long time?

Performing underwater wasn't easy. Sometimes, I had to hold my breath for a long time, which was hard. During a scene... I was wearing diving equipment inside a very small shark cage. The shark was attacking the cage and the cage kept moving. I almost ran out of oxygen. I was exhausted when I got out of the water.

Working with Jason was amazing and a lot of fun... Jason is very different from the characters he plays. When he smiled, I thought "Oh, he has the nicest teeth!" because I had never seen Jason smile in his films.

Later, I told him that I am not a native English speaker, so I needed to rehearse many times before we filmed our scenes. He was so sweet and supportive, and kept saying there was no way he could have done this film in Chinese.