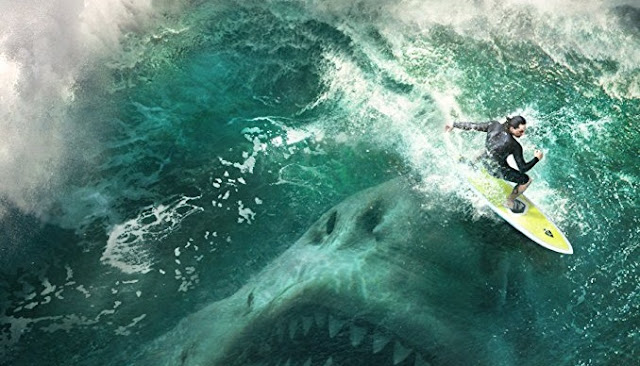 Peter Benchley’s 1974 novel Jaws did more than frighten and fascinate a generation of swimmers. It also inspired a young Steve Alten to research stories about great white sharks and their ancestors.

Alten’s take on the mother of all great whites — a prehistoric shark called a megalodon — comes to the big screen next month in “The Meg,” an adaptation of his 1997 novel MEG: A Novel of Deep Terror. Directed by Jon Turteltaub (the “National Treasure” films), “The Meg” stars Jason Statham (“The Fate of the Furious”) as U.S. Navy diver Jonas Taylor, who encounters a megalodon weighing about twenty tons in the deepest part of the Pacific Ocean. Ruby Rose (“John Wick: Chapter 2”) and Rainn Wilson (“Star Trek: Discovery”) costar.

The film’s advertising mixes plenty of teeth and the promise of terror with campy touches. Bobby Darin’s song “Beyond the Sea” plays in the trailer while swimmers and surfers flee. The posters feature taglines such as “Chomp on this” and “Pleased to eat you.”

For Alten, who turns fifty-fine in August, “The Meg” caps a long journey that began in the library when he was a Philadelphia teen, inspired by a love of Jaws. “I went straight to the library and checked out every true-life great white shark attack story,” he said in an interview earlier this year. “In the process, I came across little blurbs about megalodon, the prehistoric cousin of the great white, usually accompanied by a black-and-white photo of six scientists seated in a [megalodon] jaw.”

The megalodon grew to about 60 feet long and weighed up to 77 tons, according to the National Aquarium in Baltimore, which displays a massive replica of its jaw. People have recovered fossilized megalodon teeth that are as big as their hands at Sharktooth Hill in California, the aquarium says.

No wonder the meg never left Alten’s mind. He earned a master’s degree in sports medicine from the University of Delaware and a doctorate of education at Temple University, but as a married father of five, he struggled to make ends meet. In 1995, he saw an article in TIME magazine about deep water hydrothermal vents in the Mariana Trench in the Pacific and wondered “if that big shark was still alive down there.”

Alten returned to the library to research his idea, then wrote three to four pages a day from about 11 p.m. to 3 a.m. About six months later, the manuscript of MEG was born.

Following a guide about how to get published, he sent out about seventy query letters to literary agents. Only one, Ken Atchity at AEI, liked the manuscript, and connected Alten with an editor for a rewrite. Writing a book, Atchity told him, “is like preparing a fish to cook — you cut off the head and tail and start with the meat in the middle.”

The revision turned out to be fortuitous. Alten lost his job as a sales manager for a wholesale meat company, but MEG was published, even landing on the New York Times bestseller list.

Hollywood was interested, too, but changes in industry personnel among other issues meant a lot of stops and starts before the film finally came to fruition. In the meantime, Alten kept writing, producing six more books in the MEG series: The Trench, MEG: Primal Waters, MEG: Hell’s Aquarium, MEG: Origins, MEG: Nightstalkers, and MEG: Generations. His protagonist, Taylor, appears in all of them, sometimes with his older children — and the offspring of the prehistoric shark.

He’s also written about a dozen other books in the science- and speculative fiction genre, including Domain, Goliath, The Loch, The Omega Project, and Undisclosed. In addition, Alten launched Adopt-An-Author, a nationwide nonprofit program that provides books and materials for teachers to encourage reluctant teens to read.

Although some “MEGheads” (his loyal fan base) balked at images in the initial trailer — the shark not being albino, for instance — Alten is happy with the end result. He’s lived with Parkinson’s disease since 2006 and said in an open letter to fans online that he’s honored a studio wanted to buy his work. He’s also thankful to everyone over the years who has kept “this dream and career alive. …. what would I do without you?” 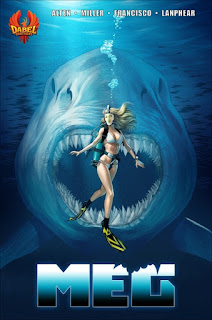 In honor of the film, MEG will be released in August as a graphic novel adapted by J.S. Earls and artist Mike S. Miller (The Hedge Knight, Injustice).