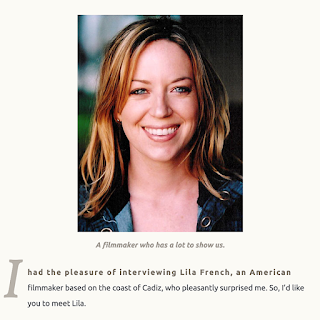 Tell me a little about yourself, Lila. (Where do you get the taste for cinema, your cinematographic influences…).

I grew up in New Orleans, studied Computer Science at MIT, later studied acting in Los Angeles, and a few years ago moved to Spain. As a kid, I always liked performing (plays, dancing, reading aloud in class, whatever), so my initial interest in film came from a desire to perform and a curiosity about what the actors were doing. In my adult years, after having studied acting, my life took a more spiritual turn. Yoga, meditation, and my journey as a human became more important, so my taste in films kind of followed. I like stories about personal growth, and stories where the characters express humanity, and I admire actors who can do that in a genuine way (like Willem Dafoe in “The Florida Project”, for example). I don’t like movies that make me feel bad for no reason, but I can definitely appreciate good “feel bad” movies with a bottom line. “Loveless”, directed by Andrey Zvyagintsev, is one. That movie makes me sad every time I think about it, but it’s because it so unapologetically expressed how poisonous the inability to express love can be, which is a powerful point to make.

I’ve seen in your IMDb profile that you’ve done various film projects with a style of their own. It’s admirable. What experiences have your work given you?.

I think I’ve learned to trust my instincts more. When doing something for the first time, it’s natural to have doubts, but many times I second-guessed creative choices, only to realize later that yes, the thing that I thought I wanted, I did indeed want. I still listen to the experts and people I’m collaborating with, but now without downplaying my own vision or opinion.

What do you think of today’s film industry? Do you think it considers emerging talent?.

Well, it’s becoming easier and less expensive to make films, so it’s easier for emerging talent to create their own projects and get in the game without having to wait for an invitation. Any film project still takes an immense effort, but if you have a story to tell, there are fewer obstacles to telling it. I like that things are moving this way, because it allows for more variety, and it enriches us as humans to hear stories from a variety of perspectives.

Even the figure of the male director or screenwriter predominates in most films. Do you think there is a change in the professional role and is the woman being better considered or not?.

Yes, I see more women and more variety in general in all areas of life (film, business, politics, …). I wish it would happen more quickly, but at least it’s happening. I see a lot of great and varied work at film festivals, so I think, little by little, stories about and/or by women, people of color, LGBTQ, and other previously underrepresented groups are making their way into the mainstream. The more we see variety on and off the screen, the more we lose our misconceptions of who should be doing what.

Tell me about your next projects.

I’m currently finishing a narrative short that I shot in Conil last year. It’s called “Winter in a Beach Town”, and it’s about the changing of seasons, literal and metaphorical, of course. I’m editing, working with the composer on the score, and with the colorist on the color. I’ve also written a narrative film, which I’d like to shoot after finishing “Winter”. It explores solitude and the need for others, and I plan to act in that one as well.

What advice would you give to anyone who wants to be a screenwriter?.

I don’t feel qualified to give screenwriter-specific advice, but what I think is important in any creative endeavor is the following. When creating something, there always seems to be a pull to try to please an audience. I think if you do this, your work not only becomes inauthentic and watered down, it makes you care about the praise and criticism your work receives, which are really not important. The most important thing is to tell an authentic story in the precise way you know it to be. Make sure you’re communicating clearly, sure, but don’t aim to please. I find that if I create something that’s honest and authentic, and if I’ve done it to the best of my ability, I’m mostly immune to praise and criticism. I don’t care how it’s received, because I know what story I was trying to tell, and that that film/poem/painting/etc. tells it in the way I intended. It’s beautiful to see art that reveals the hidden depths and nuances of its creator(s). So, let’s do that.

Could you tell us a professional anecdote that was special to you?.

Before making the film “Birdbath”, I performed in the play, and at the end of the play’s run, something special happened. It was a Sunday afternoon in the aptly named Skylight Theatre in Los Angeles, and I was there in the theatre alone after the final performance, packing up my things. The skylights and doors were open, there was a nice breeze flowing through the room, and I took a moment to acknowledge having just completed a successful run of this play we had worked very hard to get done. I then left and began walking down the street to where my car was parked. I cut across the street at a random spot, and there at the base of a tree was a dead bird. And not just any bird, but a small bird with a bright orange and yellow body and black and white wings. “Birdbath” ends with a poem about a dead bird, written to my character as a gift by the male character, conveying the tragedy of her situation and beauty of her spirit. Seeing that particular dead bird—that particularly beautiful dead bird—that day, for me, was beyond coincidence and was a very special and unforgettable gift.