An Endless Game of Scrabble - and the story of a marriage.  The little things mean a lot but so does coming up with a 50-point word. 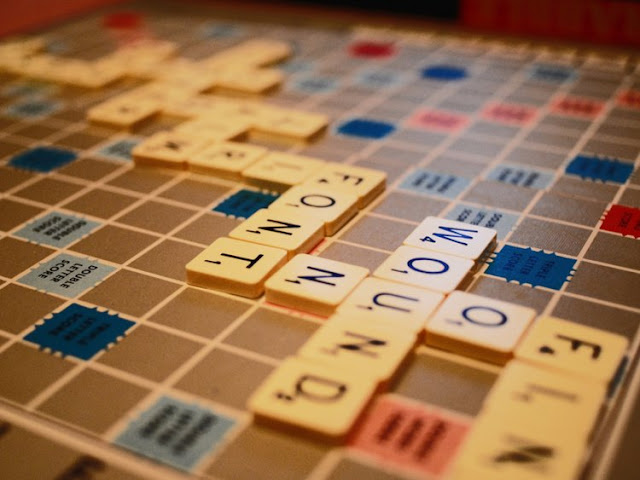 We're playing Scrabble for maybe the five thousandth time in our marriage. Most evenings, just as the day ends and before what's-his-name appears to give us the evening news, we get the game out. We have three, (count'em, three) Scrabble games: the old board, a little damaged but just fine; the brand-new Extra-large thing where you can get scores in the high hundreds; and the little Travel Scrabble thing.

I like the travel game best of all. It's attached to its own little case, zippered, eminently packable. It's a little dirty, dusty with the fine sand of Dubai and the pollution of Hamilton and elsewhere (this guy has earned his travel moniker). Neither of us can remember who bought the game: the kids? Me? Her? My personal favourite theory is Santa. It may have lost a T or R along the way, but it works just fine. The really great thing is that the game came with a couple hundred little scoring sheets and we've dated and kept them, writing where we were whenever we played. Just for fun one day, I went through the score sheets, when the lady wasn't around. The earliest was dated 1996. Since then, believe it or not, the little sheets documented a couple of hundred games: in the end, we had won and lost almost exactly the same number.

I've tried to figure out why I like the game so much.

I think, part of the time, it's my love of words. The feel of them in my mouth, the sound when they emerge. I use them a lot (the lady with the five O's and a Y would say too much), and never get tired of seeing the letters arrange and rearrange themselves on a page or laptop. They evoke memory and feeling; they express hope and sadness. Years ago I read former U.S. Sen. Samuel Hayakawa's Language in Thought and Action. What I thought was going to be a dry, academic sort of thing turned out to be really interesting, even provocative: how language plays a role in human life; how it unknowingly shapes our thinking; how it alters racial, political, commercial and religious beliefs. How it can create prejudice. Our American friends especially are exposed daily to the lessons of language. Agree with it or not, you can see the results.

Then I think, I like the game because it reminds me of our travels. We've had quite a lot of that, as it turns out. Our favourite line from Moon River is "two drifters," and we're grateful that the currents of life have taken us pretty far, with great luck. We write the place of the game — a train in Europe, the front porch of a cottage in the Dandenongs (near Melbourne Australia), a balcony in Washington DC. They're like the little magnets on the fridge door, a kind of travel diary. (We have so many fridge magnets that I worry one day we won't be able to get the door open).

They're also the diary of a marriage, maybe why I like it most. The often-even scores, the way a marriage should be. The excitement when she racks up a big one (like an "X" in the corner or when she uses All Seven Letters), the way she complains about "all those vowels," then, two moves later, cranks up 50 points on a huge word, triumph in her eyes like something on a Game of Thrones. The way we argue about a word. "That's a proper name," I say, calmly. I think calmly anyway. "No it's not!" Also calmly. Sure thing, you bet.

To resolve that difficulty a few years ago, we bought the Scrabble Dictionary, worth every penny; the thing could be a marriage counsellor. The poor thing has been left out in the rain, gotten trampled, has a part of its cover missing. It looks like something you'd find in an archeological dig, but it helps resolve what you might call difficulties. We got a new one this year but, you know what? I like the old guy just fine. In fact, I like the whole thing just fine: the travel and at-home versions, the complaints about too many vowels, the arguments about words, the words themselves. The look of triumph in her eyes.

Sometimes it's the little things — the smile of grandchild, the hugs of a daughter, the one-on-one with a son, the quiet routine — that mean the most.

And oh yes, definitely the two of us together, playing an endless game of Scrabble. Worth millions. Although, I gotta say, "hydropox" was a stretch. It did use up a "y' and a couple of "o's" though.

Dave Davis, MD, is a retired family doc and medical educator. His first novel, "A Potter's Tale," published by Story Merchant Books, Los Angeles, is available on Amazon in Canada, CA, and the US. You can visit him at www.drdavedavis.com; or follow him @drauthor24. If you want to follow the novel's story line and its clues, like the Potter's Facebook page: https://www.facebook.com/apotterstale/