What You Need to Know About Steve Alten’s ‘Meg’ Series 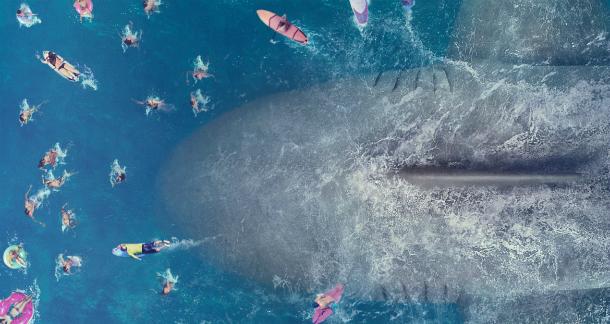 There are currently seven books in the series: 1997’s awesomely-titled Meg: A Novel of Deep Terror (recently republished with the 2011 e-prequel Meg: Origins), followed by The Trench (the only Megless title, and digitally released as The Trench: Meg 2) in 1999, then Meg: Primal Waters, Meg: Hell’s Aquarium, Meg: Nightstalkers and this summer’s Meg: Generations, and Meg: Purgatory. Alten, a doctorate of sports administration turned voraciously prolific wordsmith, doesn’t appear to have any plans to slow down.

The Meg is loosely based on the first book (excuse me, novel of deep terror) in the series, with Alten cheerfully signing off on the changes to the source material. Here we’ve got new characters, newly named old characters, a no-longer-albino megalodon and an entirely different backstory explaining protagonist Jonas Taylor’s PTSD. But even though the film diverges wildly from the book that inspired it, it might still help you to know the following about Alten’s Meg series before you watch Jason Statham wrestle a giant prehistoric shark on the silver screen.

They’re Fun
Alten’s writing tends to the prosaic and weirdly sexist (boyyyyy, is Jonas Taylor’s wife a real piece of work! Fortunately, she's been completely updated in the film, as has the book's character Terry, whom Book Jonas derisively calls "Gloria Steinem." The movie is much better about this stuff). But while these books might not be **pushes glasses up nose, over-enunciates** highbrow literature, there’s no denying they're a blast. The chapters fly by, the energy is propulsive and the premises are uniformly intriguing, from Meg’s deep sea dive redemption story to Primal Waters’ daredevil reality TV plot. And Jonas himself is undeniably compelling, the sort of terse, grizzly antihero with a heart that Statham was born to play.

They’re Scary
While Alten may not adequately sell romance or profound human sentiment in these books, there’s one emotion he’s very good at generating, and that’s fear. Meg opens with an account of the Meg back in her Late Cretaceous days. A Tyrannosaurus rex stalks a couple of hadrosaurs into the surf when “a six-foot gray dorsal fin rose slowly from the sea, its unseen girth gliding silently across their path.” Soon the T. rex gives up on the hadrosaurs because it has bigger fish to fry, and we’re treated to a completely gnarly T.rex vs. Megalodon battle that ends with this note-perfect sentence:

A moment later the dinosaur surfaced again, drowning in its own body fluids as its rib cage crushed and crumbled within the powerful jaws of its still-unseen hunter, its gushing innards strangling it to death.

GUSHING INNARDS STRANGLING IT TO DEATH. These books rule.

They’re Science-y
Look, I’m not a scientist. The only science class I took in college was called “Science For Liberal Arts Majors.” But these books seem very scientific! There’s tons of paleontological speak, a litany of jargon matched only by the lovingly rendered technical specifications of submarines. Alten goes to great lengths to establish that Megs could still exist in the deep recesses of the ocean, of which we know less than we do outer space. He reminds us in Meg’s preface that dead sharks sink, their carcasses eaten and dissolved, and that less than 5% of the world’s oceans, and less than 1 percent of the deep abyss, have been explored. I’m convinced! Megalodons exist and we need Jason Statham to kill them!

They’ll Make GREAT Movies
One chapter into Meg and I couldn’t wait to see The Meg. Having now flown through the series and cheered my way through the ridiculously fun film, I already can’t wait for any sequels that Hollywood wants to throw our way. This is fun, silly, thrilling stuff, and as big as Carcharodon megalodon feels in my imagination, she's even bigger on that big ol’ screen.

Meg: A Novel of Deep Terror