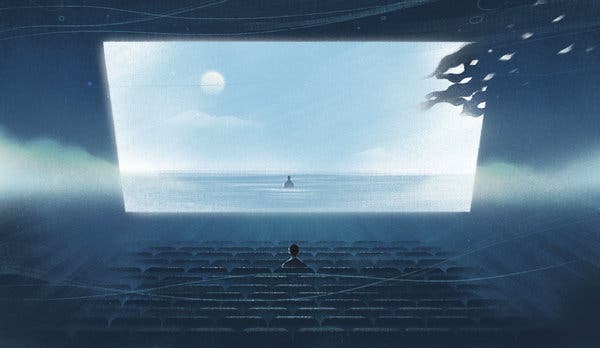 Cinema is an art form that brings you the unexpected. In superhero movies, nothing is at risk, a director says.

“It’s a perilous time in film exhibition, and there are fewer independent theaters than ever,” says Martin Scorsese.

“It’s a perilous time in film exhibition, and there are fewer independent theaters than ever,” says Martin Scorsese.

When I was in England in early October, I gave an interview to Empire magazine. I was asked a question about Marvel movies. I answered it. I said that I’ve tried to watch a few of them and that they’re not for me, that they seem to me to be closer to theme parks than they are to movies as I’ve known and loved them throughout my life, and that in the end, I don’t think they’re cinema.

Some people seem to have seized on the last part of my answer as insulting, or as evidence of hatred for Marvel on my part. If anyone is intent on characterizing my words in that light, there’s nothing I can do to stand in the way.

Many franchise films are made by people of considerable talent and artistry. You can see it on the screen. The fact that the films themselves don’t interest me is a matter of personal taste and temperament. I know that if I were younger, if I’d come of age at a later time, I might have been excited by these pictures and maybe even wanted to make one myself. But I grew up when I did and I developed a sense of movies — of what they were and what they could be — that was as far from the Marvel universe as we on Earth are from Alpha Centauri.

For me, for the filmmakers I came to love and respect, for my friends who started making movies around the same time that I did, cinema was about revelation — aesthetic, emotional and spiritual revelation. It was about characters — the complexity of people and their contradictory and sometimes paradoxical natures, the way they can hurt one another and love one another and suddenly come face to face with themselves.

It was about confronting the unexpected on the screen and in the life it dramatized and interpreted, and enlarging the sense of what was possible in the art form.

And that was the key for us: it was an art form. There was some debate about that at the time, so we stood up for cinema as an equal to literature or music or dance. And we came to understand that the art could be found in many different places and in just as many forms — in “The Steel Helmet” by Sam Fuller and “Persona” by Ingmar Bergman, in “It’s Always Fair Weather” by Gene Kelly and Stanley Donen and “Scorpio Rising” by Kenneth Anger, in “Vivre Sa Vie” by Jean-Luc Godard and “The Killers” by Don Siegel.

Or in the films of Alfred Hitchcock — I suppose you could say that Hitchcock was his own franchise. Or that he was our franchise. Every new Hitchcock picture was an event. To be in a packed house in one of the old theaters watching “Rear Window” was an extraordinary experience: It was an event created by the chemistry between the audience and the picture itself, and it was electrifying.

And in a way, certain Hitchcock films were also like theme parks. I’m thinking of “Strangers on a Train,” in which the climax takes place on a merry-go-round at a real amusement park, and “Psycho,” which I saw at a midnight show on its opening day, an experience I will never forget. People went to be surprised and thrilled, and they weren’t disappointed.

Sixty or 70 years later, we’re still watching those pictures and marveling at them. But is it the thrills and the shocks that we keep going back to? I don’t think so. The set pieces in “North by Northwest” are stunning, but they would be nothing more than a succession of dynamic and elegant compositions and cuts without the painful emotions at the center of the story or the absolute lostness of Cary Grant’s character.

The climax of “Strangers on a Train” is a feat, but it’s the interplay between the two principal characters and Robert Walker’s profoundly unsettling performance that resonate now.

Some say that Hitchcock’s pictures had a sameness to them, and perhaps that’s true — Hitchcock himself wondered about it. But the sameness of today’s franchise pictures is something else again. Many of the elements that define cinema as I know it are there in Marvel pictures. What’s not there is revelation, mystery or genuine emotional danger. Nothing is at risk. The pictures are made to satisfy a specific set of demands, and they are designed as variations on a finite number of themes.

They are sequels in name but they are remakes in spirit, and everything in them is officially sanctioned because it can’t really be any other way. That’s the nature of modern film franchises: market-researched, audience-tested, vetted, modified, revetted and remodified until they’re ready for consumption.

Another way of putting it would be that they are everything that the films of Paul Thomas Anderson or Claire Denis or Spike Lee or Ari Aster or Kathryn Bigelow or Wes Anderson are not. When I watch a movie by any of those filmmakers, I know I’m going to see something absolutely new and be taken to unexpected and maybe even unnameable areas of experience. My sense of what is possible in telling stories with moving images and sounds is going to be expanded.

So, you might ask, what’s my problem? Why not just let superhero films and other franchise films be? The reason is simple. In many places around this country and around the world, franchise films are now your primary choice if you want to see something on the big screen. It’s a perilous time in film exhibition, and there are fewer independent theaters than ever. The equation has flipped and streaming has become the primary delivery system. Still, I don’t know a single filmmaker who doesn’t want to design films for the big screen, to be projected before audiences in theaters.

That includes me, and I’m speaking as someone who just completed a picture for Netflix. It, and it alone, allowed us to make “The Irishman” the way we needed to, and for that I’ll always be thankful. We have a theatrical window, which is great. Would I like the picture to play on more big screens for longer periods of time? Of course I would. But no matter whom you make your movie with, the fact is that the screens in most multiplexes are crowded with franchise pictures.

But, you might argue, can’t they just go home and watch anything else they want on Netflix or iTunes or Hulu? Sure — anywhere but on the big screen, where the filmmaker intended her or his picture to be seen.

In the past 20 years, as we all know, the movie business has changed on all fronts. But the most ominous change has happened stealthily and under cover of night: the gradual but steady elimination of risk. Many films today are perfect products manufactured for immediate consumption. Many of them are well made by teams of talented individuals. All the same, they lack something essential to cinema: the unifying vision of an individual artist. Because, of course, the individual artist is the riskiest factor of all.

I’m certainly not implying that movies should be a subsidized art form, or that they ever were. When the Hollywood studio system was still alive and well, the tension between the artists and the people who ran the business was constant and intense, but it was a productive tension that gave us some of the greatest films ever made — in the words of Bob Dylan, the best of them were “heroic and visionary.”

Today, that tension is gone, and there are some in the business with absolute indifference to the very question of art and an attitude toward the history of cinema that is both dismissive and proprietary — a lethal combination. The situation, sadly, is that we now have two separate fields: There’s worldwide audiovisual entertainment, and there’s cinema. They still overlap from time to time, but that’s becoming increasingly rare. And I fear that the financial dominance of one is being used to marginalize and even belittle the existence of the other.

For anyone who dreams of making movies or who is just starting out, the situation at this moment is brutal and inhospitable to art. And the act of simply writing those words fills me with terrible sadness.