My personal, tiny, attempts at helping our poor planet by Dave Davis

There are little things that we can do, not drifting helplessly in a sea of worry 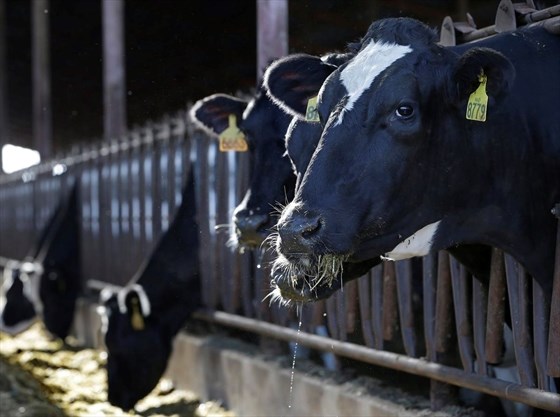 Cows are not great for the environment, writes Dave Davis, but they are deserving of a dignified life regardless. - Rich Pedroncelli , The Associated Press

It was Lent or something close to it, and we were visiting our good friends-friends for life in Virginia for a few days. Wonderful couple, two fine sons, grandkids, the most hospitable people on the planet, with one slight difference from most of our friends: they were and are strict vegans. Soy milk, grains, veggies and fruit vegans. With good cause too, they said.

They had both read (digested you might say) the book, The China Study: The Most Comprehensive Study of Nutrition Ever Conducted and the Startling Implications for Diet, Weight Loss and Long-Term Health by Thomas M. Campbell. They were firm believers in its conclusions, namely that our current eating habits were a major cause of cancer and other health problems.

Plus, it wasn't good for the planet.

I read it too. My wife and I decided we'd give up our regular diet (it was Lent after all) and, for 48 hours for her, longer for me, we did. Soya milk, faux-cheese, plant-based foods. Finding out where the vegan food shelf was in the local grocery store (there are actually several shelves now). I lasted maybe two weeks as a vegan, disturbed by dreams about chicken legs and cheeseburgers; I've slowly added back things like fish and chicken. A lot of chicken, I must say: my wife thinks I'll grow feathers one day.

Fast forward 10 years. The diet has slowly morphed. I'm certainly no vegan — more like a vegetarian who eats fish and chicken — but I've never returned fully to a regular North American diet. For the most part, I avoid red meat, thinking a couple things. One: most, though not all authorities, say that too much red meat isn't good for your body (there's evidence about heart disease, cancer and gout. Check out what the World Health Organization has to say.) Two: mostly now, I have to say, if a little sheepishly, it's my bit for the planet. Take cows for example: the amount of grain it takes to feed them, and the amount of gas they expel make them contributors to the greenhouse effect. And then there's this: I like to think they're sentient, deserving of life as much as we are.

Recently I read something in The New Yorker, a brilliantly crafted piece by Jonathan Franzen, an awesome writer. "What if we stop pretending?" he asks. Pretending what? Pretending that a global apocalypse of climate change will not engulf us all, and if not us, then our kids or grandkids.

Words are powerful tools. He makes a convincing case about climate change and our hurtling headlong into planetary disaster, as though that were a certainty. There are other opinions of course: my daughter, for example, thinks the planet will survive, thank you very much. I agree with her; it's us that I worry about. Franzen makes one very good point: faced with annihilation (in fact, faced with anything out of our control), we do two things. First, we deny the fact, since there's so little we can do; take our death for example. We only think about it episodically, not focusing on it. Breakfast though, Franzen says, breakfast he can focus on. I can relate to that (no bacon, though).

Or we do little things — not only in the planet-preserving, recycling, plastic-sparing mode, but also in little things that build friendships, equity and social justice. Regardless of the details, his piece is provocative, worth a read, and debate. And I agree with him about little things that we can do, not drifting helplessly in a sea of worry or self-pity (or worse, he says, denial).

That got me thinking about my dad. He was another Dave Davis (there are actually a lot of us out there) but to his many friends and even us he was "D.O.," a unique guy. In the 60s, faced with retirement from Dofasco, he started something called Third Sector, geared to recycling newspaper, kick-starting the blue box phenomenon locally, taking men off welfare rolls and giving them employment. The third way, he called it, involving the public sector and the private, a kind of collaboration. Ahead of his time, that D.O., even ahead of global warming.

Maybe that's what the not-really-vegan diet is: a kind of personal if tiny attempt to help the planet, by helping myself. It's not really very much but it's something we can do, like washing out the plastic to recycle it. Like turning lights off when we're not in the room. Like walking wherever we can, avoiding the oversized, cumbersome, gas-guzzling things that clog our roads.

And like us, even if we don't join them, we can admire our vegan friends (who continue to be amazingly hale and hearty, thanks for asking). Oh, and one more thing: maybe growing feathers, or gills — gills might be good for the high-water, flooding apocalypse thing.

Dave Davis, MD, is a husband, father and grandfather, a retired family doc and medical educator. His first novel, "A Potter's Tale," published by Story Merchant Books, Los Angeles, is available on Amazon in Canada, CA, the US and the UK. You can visit him at www.drdavedavis.com, follow him @drauthor24, or write him at drdavedavis.com.

Dave Davis, MD, is a husband, father and grandfather, a retired family doc and medical educator. His first novel, “A Potter’s Tale,” published by Story Merchant Books, Los Angeles, is available on Amazon in Canada, CA, the US and the UK. You can visit him at www.drdavedavis.com, follow him @drauthor24, or write him at drdavedavis.com.