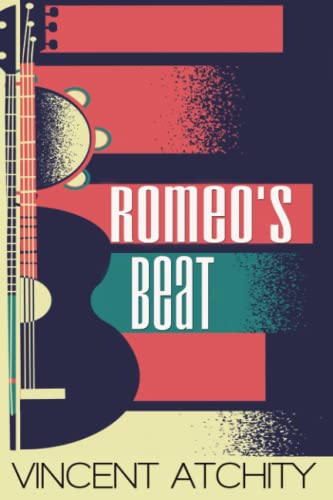 How delightful to discover in the #MeToo age, when trust between men and women—and romantic love itself—has reached its nadir in our dysfunctional culture, that it’s still possible for an American novelist to write a literary love story that celebrates the eternal bond between man and woman. That’s precisely what Vincent Atchity has achieved with Romeo’s Beat. His novel has a deceptively simple premise—until you let it enfold and lift you into regions rarely explored in contemporary fiction. The points of comparison I can think of in terms of Atchity’s style are Ernest Hemingway (particularly in A Farewell to Arms) and Anaïs Nin (particularly in her Ladders to Fire). But Atchity has his own distinct voice, well-suited to his subject matter, giving his book a rhythm and cadence that make it a prose poem of unsurpassed beauty.

I had the honor of hearing Atchity do a live reading from his novel. During the Q&A afterward, he mentioned that given his responsibilities running a psychological clinic and raising three children with his wife, he had only been able to devote sixteen minutes day to his novel, beginning in 2007. Thankfully, he persisted, and the result is exquisite.Set in the early 1980s, an era when great rock anthems resounded from FM stations, Romeo’s Beat follows the journeys of Juliet, a beautiful young Kansas botanist possessed of a mystical bond with nature; and Colin, a young singer/lyricist/guitarist who’s postponed recording his first record album in L.A., despite a lucrative recording contract, in a quest to find something enduring in his own music.Juliet meets Colin while she’s on a solo pilgrimage to Salamanca, Spain, the city of her philosophical hero, Miguel de Unamuno. In her strolls through Salamanca’s cobblestone streets, she returns often to the Calle de Bordodores to see Pablo Serrano’s monumental statue of Unamuno. Yards away is one of her favorite shrines to Mary. Juliet considers her own personal religions to lie “suspended in a continuum between Unamuno and the Virgin Mary.” Unamuno scribed these words: “My religion is to seek for truth in life and life in truth.” Juliet believes this, too. “Even knowing that I shall not find them while I live,” she sadly concludes.She’s at a crossroads. Having won a scholarship to begin her doctoral studies in botany in a month, she’s also engaged to Brad, a pleasant enough young man who brings solid financial prospects, given his upscale family roots. But Brad operates on a plain of consciousness that can’t begin to approach Juliet’s capacity to blend romantic and sexual passion with mystical intimations that take her into realms of awareness lightyears beyond Brad’s conventionality. She tells herself that she loves Brad, but that affirmation has started to ring hollow. Then she meets Colin in Salamanca, during his stopover on a peripatetic journey through Europe in search of his musical voice. The thunderbolt strikes them both. Juliet is powerfully drawn to this stranger in a way wholly unacceptable to her trajectory in life, so soon to be devoted to study, teaching, and a conventional marriage.Colin, for his part, is strongly attracted to Juliet as well, but he’s obsessed with his own search, expressed in this reflection while he samples garlic-fried Champiñones mushrooms in a Salamanca tavern: “Colin had learned to cook from his father, and had a deep appreciation for dishes that brought together fundamental elements. The smell of olive oil and garlic had won him over before he’d even realized its source. It had grabbed something inside him that was older than he was, something that was inside everyone, and that would outlast any individual. For lyrics to last, Colin thought, they had to incorporate something as fundamental as olive oil and garlic.”What follows is an elegantly articulated dance of love that focuses on the internal journeys of the two lovers, as they gradually come to accept that their meeting is going to disrupt their lives and change them both profoundly. The pace of this change unfolds slowly—perhaps too slowly for modern readers (though the novel is a quick read at 144 pages). But despite this minor pacing issue, Atchity does a magnificent job of dramatizing how, as their relationship becomes more intimate, Juliet’s and Colin’s hearts and souls are embroidered together, giving special significance to the Calle de Bordodores (which means “embroiderers”) that Juliet visits so often. From their love grows intimacy, the birth of a daughter, and a tragedy that raises the tale to classical stature.It’s remarkable how Atchity occupies the minds, hearts, and souls of Juliet and Colin, particularly since we live in an age where writing from the point of view of the “other”—men writing from a feminine point of view, or women writing from a male point of view—is a taboo that often reduces our literature in a way that great writers of previous ages didn’t have to contend with (imagine Shakespeare hesitating to write Romeo and Juliet because he wasn’t a woman). Atchity’s insights are those of a mature artist who’s achieved a measure of wisdom about the eternal truths of life and love. At the end of the novel, I found myself hungering for more of this gifted writer’s work. Highly recommended reading.