SHADOW WAR, THE THIRD INSTALLMENT IN THE ELLE ANDERSON SERIES

FROM US NAVY AUTHOR A.M. ADAIR The highly anticipated and gripping follow-up to The Deeper Shadow reunites readers with CIA Operative Elle Anderson on the run after being set up by her former handler turned criminal mastermind. Elle must be smarter, faster, and more lethal to stay alive long enough to turn the tables on her enemy, all the while evading teams on both sides of the law. This means using any means necessary to destroy the man pulling the strings. There are no rules in the shadows. This game is driven by will. Nothing is going to stop Elle from finishing her war. The end justifies the means… and the end is here.

Author A. M. Adair is an active-duty Chief Warrant Officer in the United States Navy with over 20 years in the Intelligence Community. Her experiences have been unique and provided her imagination with a wealth of material to draw from to give her stories life. A lifelong fan of the genre, her debut novel, Shadow Game, is the first book in The Elle Anderson Series, and was turned into a graphic novel in January 2022. Book two, The Deeper Shadow, was released in November 2020, and the explosive third installment, Shadow War, is coming March 2022. Autographed copies of her books, and news available on amadair.com.

“Adair keeps you breathless in anticipation in this exciting thrill ride, with new surprises galore. Action, drama, and political intrigue that can only be written by someone who has been there, done that.”

— Andrews and Wilson, international bestselling authors of the Tier One, Sons of Valor, and The Shepherds thriller series, as well as, Rogue Asset, their first installment in the WEB Griffin Presidential Agent Series. 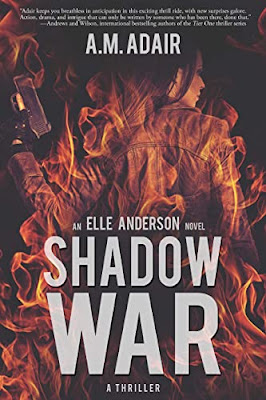 Shadow War by A.M. Adair is available on Amazon