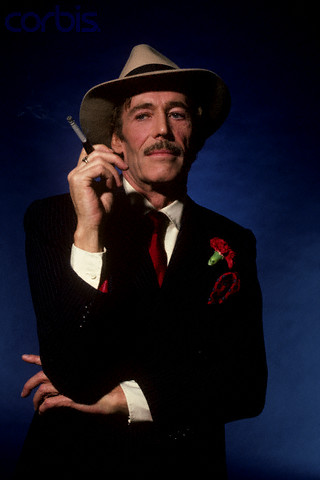 The sum of these unlikely parts was the zesty 1982 movie comedy “My Favorite Year,” starring O’Toole and Linn-Baker, directed by Benjamin and produced by Mel Brooks. It paid loving tribute to the original golden age of TV in the mid-20th century and the variety shows that were the “Saturday Night Live” hits of their day.

When Benjamin read the screenplay credited to Norman Steinberg and Dennis Palumbo, he immediately turned to his wife, actor Paula Prentiss.

“I hope they want me for this, because it’s just great,” Benjamin recalled saying.

The film, marking its 40th anniversary, is set in 1954 and topped by O’Toole as faded but still-glam movie idol Alan Swann, who’s appearing on “Comedy Cavalcade” only to pay off his IRS debt. Linn-Baker plays Benjy Stone, an energetic young writer tasked with keeping Swann out of trouble (read: sober) until the broadcast.

The inspirations for “My Favorite Year” included Sid Caesar, the decade’s reigning TV comedy star, and “Your Show of Shows,” the hit he topped from 1950-54 and was followed by “Caesar’s Hour.” The movie also is infused with the spirit of Errol Flynn’s swashbuckling films such as “Captain Blood,” with Swann’s “Captain from Tortuga” seen in a faux clip.

Brooks, who wrote for “Your Show of Shows” alongside another future giant of stage and screen, Neil Simon, said in his 2021 memoir “All About Me!” that the movie represented “my love letter to Sid Caesar and the early days of television, and it was also a damn good story.”

“It’s one of the three best productions about live TV that I’ve ever seen,” said David Bianculli, a TV critic for NPR’s “Fresh Air” and author of “Dictionary of Teleliteracy.” His other top picks: “The Dick Van Dyke Show” and Simon’s play “Laughter on the 23rd Floor.”

“My Favorite Year,” which is available on streaming services, had a respectable box office opening in October 1982, coming in third behind “An Officer and a Gentlemen” and “E.T. the Extra-Terrestrial.”

Give It A Read Today!