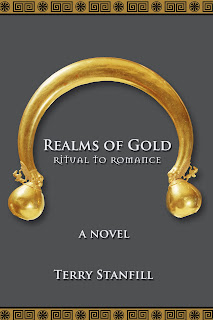 REALMS OF GOLD (reviewed on September 15, 2012)
Stanfill’s (The Blood Remembers, 2001) novel follows an unlikely pair of lovers as they piece together an ancient puzzle that will shed light on an age-old mystery.

In 1953, an archaeological team working in Vix, a small town in the Burgundy region of France, found the 2,500-year-old tomb of a woman some claim to have been a Celtic princess. The burial site, surprisingly well preserved, housed both the woman’s body and a treasure of immeasurable value that included a perfectly intact krater (a ritual wine vessel) likely cast in Southern Italy. While the groundbreaking find revealed much, it left many questions unanswered: Who was this mysterious woman? Why was she entombed with such treasure? And what was the origin of the foreign urn? These questions—which still vex experts today—drive Stanfill’s scintillating tale of intellectual discovery and budding romance.

In contemporary Venice, Bianca Evans Caldwell—an American author—crosses paths with archaeologist Giovanni de Serlo at a wedding and immediately falls for the suave, confident Italian. But neither suspect that this chance meeting would send them both on a continent-spanning adventure that will help solve the mysteries of the Vix krater and the sleeping princess, all the while delivering surprising new insights into the mythology of England and France. Stanfill’s narrative initially feels ornate, but it morphs into a lively, precise plot. The author pours her estimable learning into this, her fourth novel, and she’s equally comfortable writing about the nuances of ancient art, the links between myth and history, and the nooks and crannies of modern-day Italy. And though her book seems by turns a travel guide or an archaeology textbook, its details only add verisimilitude to a satisfyingly complex story of love, learning and intrigue in Europe.