All It Takes For Evil To Triumph Is For Good People To Stand By And Do Nothing! 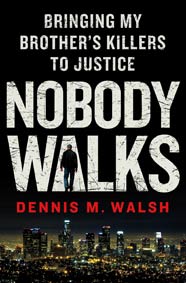 The title for this article could have been an alternative title for Nobody Walks:  Bringing My Brother’s Killers To Justice by Dennis M. Walsh. This was a heart-wrenching true story of the journey to bring the killers of Christopher John Walsh to justice. Dennis Walsh, a criminal defense and civil litigation attorney, spends four and a half years making sure that the wheels of justice turn on this case. That is a long time and I believe we all know or should know that the wheels of justice may turn at a snail’s pace especially when one is patiently waiting for a killer or killers to be punished.

As I stated this is a true story and there are times when the reader believes that there may never be an end to this story. The end does come; but not before one finds out just what Christopher Walsh went through before finally being put out of his misery. Throughout this story one gets the sense that Christopher may have had his faults and may not have always operated on the right side of the law, but as one reads the story one also realizes that no one deserves to be murdered in this fashion. The reader also comes to a sense that many friends of Christopher may not have actually been his friends. They stand around and do nothing as this murder and events afterward play out.

Nobody Walks is a heart-wrenching story and as I read it there were many times I was hoping for a revenge ending and not necessarily an ending of killers being brought to justice. This was shocking for me because I do believe that when one commits murder or some other type of violent crime there needs to be legal punishment.

In 2003, Christopher Walsh was found stuffed in a trash barrel in a storage locker in Van Nuys, California. After the dilatory murder investigation took seven months to file charges, and more than four years to go to trial, Dennis Walsh knew it was up to him to keep his little brother’s murder from becoming a cold case.

The only son of a large Irish American family to stay on the straight and narrow, Dennis found his family’s dubious background paired with his law degree placed him in the unique position to finish the job the cops couldn’t. Fencing with the police and the DA’s office, Dennis spent years slinking between his life as a stand-up lawyer and hitting the streets to try to convince the dopers, thieves, prostitutes, porn stars, and jail birds that populated Christopher’s world to come forward and cooperate with the police. Yet he walked a fine line with his harsh tactics; prosecutors continuously told him he was jeopardizing not only the case, but his life.

Staying on the right side of the law to hunt down these murderers put every part of Dennis to the test and it wasn’t long before the brother who went clean knew he’d have to get his hands dirty. But 100 arrests later, the murders are in jail for life.

This was a great read, although there were times when it did seem to drag I still enjoyed Nobody Walks:  Bringing My Brother’s Killers To Justice by Dennis M. Walsh. After some thought; I have decided to give this book a rating of 4****.