In his quest to get children all over the world interested in classical music, Warren Woodruff, Ph.D., can become the next J.K. Rowling.

The Buckhead resident had his 1998 play, “The Magic Piano,” adapted into a 2012 book, “Dr. Fuddle and the Gold Baton,” and a screenplay for a feature film that will be one of at least three movies in a franchise. The first screenplay, which he wrote, was completed in July 2013 and he is halfway through the second.

Woodruff, who works as a pianist, teacher and author with a studio in Roswell, came up with the idea of the characters in “Dr. Fuddle” when he wrote the play for a summer camp as a way to introduce children to classical music.

After meeting writing coach Mardeene Mitchell in 2009, she introduced him to Ken Atchity, Ph.D., a writing coach and producer who owns Story Merchant, a Los Angeles-based company that produced the movies “Joe Somebody,” “Life or Something Like it” and “Hysteria,” the following year at Mitchell’s Write the World in Atlanta conference.

“He pitched me his book,” Atchity said. “I told him, ‘That’s the worst pitch I’ve ever heard but the best story I’ve 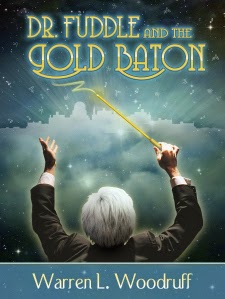 heard in a long time.’ He blushed deep red and we became friends immediately.”

Woodruff signed a multi-level development deal with the company for an undisclosed amount in 2010. It includes the books — novels and picture and education books — movies, merchandise and toys. Achity and Woodruff are now working with Del Mar Enterprises, a global film broker, to fund the movie project.

The book and movie are about the mystical Dr. Fuddle leading five middle-schoolers into the land of Orphea to bring back the Gold Baton from evil forces using it in malicious ways, and to restore its rightful function of bringing harmony to the universe.

Atchity said his company gets about 10,000 pitches for movies or books each year and it chooses an average of four to five, with one film produced by the company. So being selected by Atchity was huge for Woodruff.

“It was euphoria, the happiest day of my life,” he said. “This has been a vision of mine for many years. It’s because I have been a music teacher for 28 years and I have personally witnessed over and over and over the transformative power of music and what it can do for a child, giving them self-esteem and a challenge, something to work on.”

Woodruff came up with the idea of Dr. Benjamin Eraspus Fuddle, aka B.E. Fuddle, from music professors who mentored him at three colleges. Most of Dr. Fuddle’s personality comes from Ellen Hermann, a professor at Tennessee Temple University, where he earned a bachelor’s degree in piano performance. She studied with a student of famous Hungarian composer Franz Liszt. The rest of Dr. Fuddle’s character comes from Earl Miller, who Woodruff studied under while getting a master’s degree in piano performance at the University of Tennessee, and Ivan Davis, who he was mentored by while getting his doctorate in musicology with a concentration in piano from the University of Miami.

Atchity said the movie will be made in Georgia or another state that offers filmmakers tax breaks, and the start date for filming has not been set yet.

“The concept itself was a wonderful uplifting story for kids to inspire kids to perfect themselves through classical music, to pursue excellence,” he said. “It was a universally appealing story that could be like ‘[The Chronicles of] Narnia’ and ‘The Wizard of Oz.’ … Everyone loved his [first] script based on his first book. I haven’t heard one negative word from it from anyone in Hollywood. That’s unusual. You usually hear reams of negative words.”

Woodruff, an Indianapolis native who is a distant relative to former Coca-Cola President Robert Woodruff, said he wrote the book and screenplay “to change the course of history.”

“The world is so full of such divisiveness and problems and chaos, and music has been able to proven to heal, transform, edify and transform the human spirit,” he said. “I compare this to the Argentinean [music] program, El Sistema, … that has lifted children out of poverty. It has over a million children in youth orchestras. They’ve seen the crime rates plummet where this has been instituted. My goal is to duplicate that through the Hollywood movie franchise to educate children all over the world and create harmony and joy. That’s what music does. It’s done it.

“The joy music has given me as opposed to my friends who work in business deals, it’s indescribable. … I was struck by that lightning at age 10. I just turned 50 and music has been such a powerful influence in my life and it shows there’s hope and it gives people something happy and meaning in their lives. The whole goal is to create social change and inspire. So many things in the world are depressing. You turn on the news and these kids see this negativity in the world. You turn it into something great and noble. Classical music is different. Not putting down other forms of music, but this music is so transforming and inspiring.”