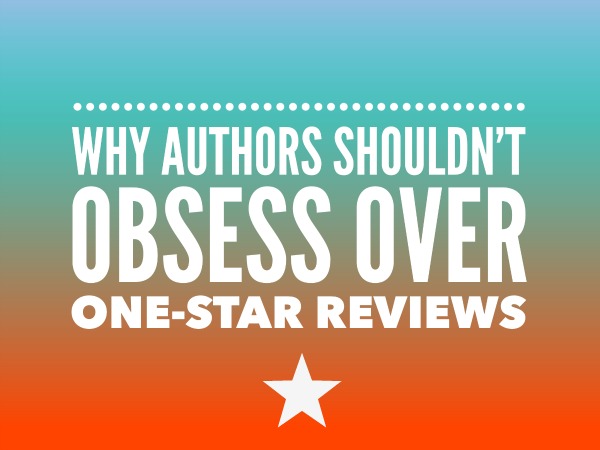 And no one is immune. Whether you’ve got 10 best-sellers to your credit or it’s your first book, you can expect at least a single one-star review.

There are the one-star Amazon reviews that make you roll your eyes.

“If possible, I’d give this pile of garbage zero stars.”

“Not really of much use for me. Seems like just a lot of useless information to fill up a book.”

“The best part of this book is the cover photo.”

Then there are the one-star Amazon reviews that have a little more substance.

“If you know nothing at all and are not good at Googling this might be a good choice.”

“I really didn’t like this book. I don’t understand why it’s so highly rated. I found the characters to be either overly dramatic, willfully ignorant, or utterly apathetic. They were just too extreme.”

“I was expecting a great deal of sociological analysis that relate to the author’s personal experiences but instead got a 272 rambling, inconsistent, humble brag of a memoir sprinkled with a few facts and statistics for good measure.”
What’s the difference between the two?

You can’t learn anything from the bad reviews that seem nonsensical or just plain mean.

But if one-star reviewers consistently comment that they were disappointed because your book didn’t include information they expected — and each bad review refers to the same missing information — you should update the description to forewarn readers: “This book is not about ‘X.’ ” (And perhaps add that missing information to a revised edition.)

Or, if reviewers repeatedly comment that the book is poorly written, is so riddled with typos that they couldn’t finish reading it, or that the dialogue was stilted, it’s time to take note.

Sometimes the feedback is useless, sometimes it’s helpful, right? The challenge is to be objective enough to see it for what it is.
3 reasons to embrace one-star reviews

When you see a one-star review that says, “I bought this as a gift but it arrived too late,” what’s your reaction?

I’m going to go out on a limb here and suggest that you probably don’t think any less of the book or its author. Perhaps you think less of the reviewer for reviewing the delivery schedule, not the book’s contents.

Readers can see past silliness as easily as authors can.

2. They make the four- and five-star reviews believable.

Be honest: When you see a book with 60 reviews and they’re all five stars, does a quiet little voice in your head say, “Really? Not even one four-star comment? Or a couple of threes?”

That’s because you’re smart enough to know that this is a subjective business. You might hate what I love, and vice versa. So it seems kind of odd when everybody agrees that it’s a great book.

A 4.6, review average, especially when there are lots of reviews, is more credible than 5.0. (Because, as noted in point 1, readers aren’t stupid.)

3. They can provide feedback that helps you improve the book or its description.

As noted already, if you get the same negative feedback from several people, pay attention. Consider taking action on it.

For example, if you’re charging $14.99 for a 90-page paperback and you’ve got a slew of one-star reviews saying the book isn’t worth $14.99, it’s time to evaluate price versus perceived value.

Look for patterns in those negative reviews to see what you can learn from them. Sometimes, it’s nothing. But sometimes it’s something — even a big something. You can use that feedback to your advantage.