Non-Fiction Book on the Slenderman Controversy From Nick Redfern February, 2018 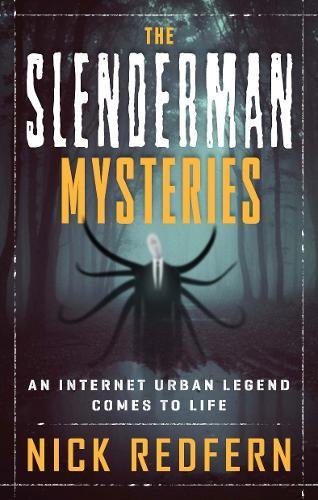 It’s the dead of night; you are fast asleep. Suddenly, you are wide awake but unable to move. Hunched over you in the shadows is an eight- or nine-foot-tall gaunt entity with spider-thin limbs, dressed in an old-style black suit, its pale face missing eyes, nose, ears, and mouth. You finally manage to cry out. The monstrous thing disappears as suddenly as it appeared.

You just had a terrifying encounter with the Slenderman.

Who―or what―is the Slenderman? His existence began on the Internet, but he didn’t stay online. The Slenderman may be a tulpa, a thought-form that can stride out of our darkest imaginations and into reality if enough people believe in it. In May 2014, two young Milwaukee girls almost killed a friend in the name of the Slenderman. Perhaps, like the vast Skynet system in the Terminator movies, the Internet is turning against us―and attacking us with digital equivalents of our own online nightmares.

The Slenderman has come to life. For the first time, this book reveals the full and fear-filled saga.