Dennis Palumbo’s Daniel Rinaldi Reconciles His Past in Head Wounds 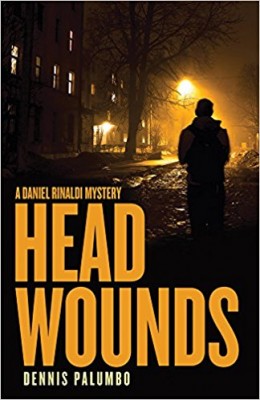 We all look forward to the debut of a new Daniel Rinaldi novel and reunion with the psychologist we all would like to consult. Head Wounds (2018) is the fifth and latest in the Rinaldi series, and it does not disappoint. Rinaldi’s warmth and his tendency to run a bit afoul of the system is still evident and reading it is like welcoming back an old friend.

As Head Wounds begins, Rinaldi still cannot quite move on from the past. His wife’s murder has deviled him in every preceding book in the series. He cannot accept the conclusion that Pittsburg Police have agreed upon: Barbara Rinaldi’s death was a mugging gone wrong. Rinaldi nearly lost his own life in the attack and incurred infinite blame from Barbara’s father, who made his professional and personal life equally miserable. The irony is, of course, that Barbara’s father need not have bothered because no one could hold him more responsible than did Rinaldi himself. By this time, he has come closer to putting his life back together and taken up his practice. However, he has succeeded in resuming his life, survivor’s guilt has haunted him. Now it seems that a background investigation dossier from an outside source on Rinaldi himself has emerged reviving a hope that something new will emerge to further the investigation.

Now, years after the event, Rinaldi gets more than he bargained for when a person of interest emerges to finish what started that evening in a restaurant parking lot. We learn that Barbara’s past had complexities Rinaldi was ignorant of and that a quirk of fate kept Rinaldi in relative safety these past years. All bets are off as Rinaldi and his associates are harassed, threatened, and put in physical jeopardy while Rinaldi’s life threatens to unravel. We meet an adversary worthy of the term who has had the ensuing years to plan his revenge and is one or two steps ahead of Rinaldi at every turn. That this perpetrator does not quite have all the facts of Rinaldi’s life straight makes him unpredictable. That he is brilliant, egotistical, and relentless ups the stakes.

No small part of the pleasure in reading Head Wounds is reacquainting ourselves with Palumbo’s recurring characters in the police as well as in Rinaldi’s personal and professional life. We meet Harry Polk again who somehow makes irascibility and professionalism work in tandem to make him a better cop. It would be too easy to dislike Polk if not for the way his character develops in every novel. Very good to see him and his take on Rinaldi’s tormentor.

Also, back again is former FBI profiler, Lyle Barnes–he of the “night terrors” that still have not quite gone away. Barnes’s situational analysis, not to mention his many years of experience dealing with the most elusive and canny of the worst of the nation’s criminals, makes him a sterling cohort. Barnes knows all too well what the experience of having a clever, calculating murderer on his trail is like. Also back are Noah and Charlene who run the bar Rinaldi is particularly fond of and spends time in frequently to our delight. Besides being a big sweetie, Noah is a paranoid schizophrenic who stays on his meds and the straight and narrow thanks to his partner Charlene. I always look forward to Rinaldi’s down time at the bar not least because its informality encourages all the characters involved to speak their minds and reveal more than was intended—Rinaldi included.

So sit back and enjoy yourself welcoming back people who are part of your reading life. Is it too early to be anticipating the next Rinaldi novel?

Sharon Tucker is former faculty at the University of Memphis in Memphis TN, and now enjoys evening supervising in that campus library. Having forsworn TV except for online viewing and her own movies, she reads an average of 3 to 4 books per week and has her first novel—a mystery, of course—well underway.