It’s the summer of ’62, and twenty-five-year-old journalist Rory Long receives a phone call at quitting time: it’s Marilyn Monroe. She wants to personally compliment him on a review he wrote of the new collected works of poet Carl Sandburg.

She then enlists the cub reporter to tell her story; she doesn’t want to be remembered as a joke. When they meet, Rory is captivated by her knowledge of classical music, art and literature. As their relationship intensifies, Rory experiences a coming-of-age inspired by this side of Marilyn few know, and at the same time, Marilyn is influenced by Rory to begin reassessing her own life.

But when Rory’s boss assigns him to write an article on the unsolved murder of the Black Dahlia, paranoia and tension mount. File papers go missing, then mysteriously return. An unknown covert organization watches Marilyn Monroe’s every move, thinking she may hold a clue to the Dahlia case. And just when Rory can feel he’s getting closer to the truth, J. Edgar Hoover himself intervenes to request that Rory be reassigned. Rapid changes are about to unfold in the land of the free, and they may be more costly than even Rory can surmise.

In Art Johnson’s latest novel, he continues his style of combining historical fact with fiction to offer the reader a steady stream of drama, tension and humor. Marilyn, My Marilyn reveals fresh insight into the most iconic woman of modern times, not as a biography, but with a view of a nation which often buries the truth with its dead.

An extremely well written fictional account of the friendship between a journalist and Marilyn Monroe, in the lead up to her death.

I loved the character of Rory Long and his determination to not be put off Marilyn and his decision to show Marilyn as he saw her.

His depiction of Marilyn is also refreshing and although it shows the known sides, it gives another facet to her.

I’m aware this is a fictional account but it does hook you in and causes you to rethink those who you think you know. Maybe we all need to look a little closer at the people we know in public and in private.

A lovely, sensitive and brave version of which it is not only enjoyable, but believable. 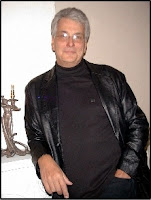 Art Johnson has been a highly regarded musician for over forty years and has performed with everyone from Luciano Pavarotti, Lena Horne, Randy Crawford and Mark O'Connor, as well as being an Academy Award and Grammy Award participant. He is a solo recording artist with ten Cd's to his credit. He has toured all over the globe and his life experience has produced his first mystery/suspense/detective thriller, "The Devil's Violin" which in it's debut has caught the attention of the reader as well as the reviewers. He lives in Monaco where Her Serene Highness Princess Charlene has requested a copy which is now in the Palace. His taut crisp prose has been well received and his newly gathered fans as an author are waiting for the next book.