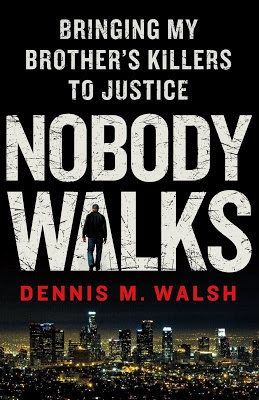 Pulpy, engrossing account of losing a family member to a senseless murder and retribution delivered through the criminal justice system.

Attorney Walsh was the only one among his four brothers to follow the straight-and-narrow path, perhaps due to the example set by their father, a Cleveland cop turned mobster. But none of them were prepared for the death of Chris, the youngest, at the hands of fellow denizens of the meth-and-gangs subculture on the fringes of Southern California’s pornography business. Walsh lived a sibling’s nightmare, asked to identify Chris’ decaying body. Street gossip quickly pinpointed the killer, David Steinberg, Chris’ former roommate, who was an associate of white supremacist prison gangs. Despite fears that he might pre-emptively sabotage eventual prosecution, Walsh began sniffing around Chris’ friends, a motley group of drug users, porn stars and entertainment-industry hangers-on. Many agreed to cooperate with him, given the implied threat of his more criminally inclined brothers’ thirst for vengeance. The narrative is sensibly straightforward, following the turns as police, prosecutors and Walsh make efforts to gather evidence on, arrest and successfully prosecute Steinberg and his cronies. As the author himself might agree, he is in some ways too close to the material. The narrative is populated by a surfeit of underworld figures who don’t really come alive as fully developed characters, but instead seem caricatures of seamy decrepitude. Still, Walsh captures the arc of his family’s involvement in an act of senseless malice, calling into question the cultural endurance of macho violence within certain subcultures and the difficulty of holding men responsible for horrific acts within the legal system’s overtaxed framework.

Gritty, effective, personalized tale of the outlaw lifestyle and its consequences.