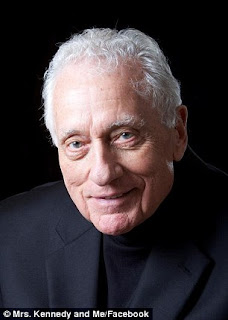 Former U.S. secret service agent Clint Hill with the Theodore Roosevelt Rough Rider Award, the state’s highest accolade for its citizens. The award honors present and former North Dakotans who have made great achievements in their fields, and who have well represented the state’s values.

“Clint Hill is an exceptional North Dakotan who has risked his life and health time and time again to protect our nation and its commander in chief,” said the Governor.
Burgum is a former Microsoft executive who received the award himself in 2009 before being elected to office. He released a statement announcing Hill as the recipient of the award, and applauded him for his lengthy service to the nation. Hill served in the Secret Service for seventeen years between the 1960s and 1970s, witnessing the heightened tension of the Cold War. While serving, he was responsible for protecting five consecutive presidencies, from Dwight D. Eisenhower to Gerald Ford.
Hill was born in Larimore, N.D., and grew up in Washburn, N.D. He later studied at Concordia College, where he played football, basketball, and baseball, and went on to earn degrees in both history and physical education. Although Hill wanted to work as a teacher after graduation, he was instead drafted by the U.S. army, where he served as a Counterintelligence Special Agent until he was honorably discharged in 1957. He was then employed by the Secret Service between 1958 and 1975, during which he protected the Eisenhower, Kennedy, Johnson, Nixon, and Ford presidencies.
“It is an honor to be recognized by your home state, and North Dakota has always been my home,” said Hill. “I am honored and humbled to be placed in the company of the many incredible North Dakotans who have received this award.”
During the Kennedy administration, Hill was primarily responsible for protecting First Lady Jacqueline Kennedy. When President Kennedy was shot in 1963, Hill ran and jumped into their car in order to shield the First Lady and President from further harm. Hill is credited with saving Jacqueline Kennedy’s life and was honored at a ceremony days later, which the First Lady attended.
“Mr. Hill has no doubt earned this medal for exceptional bravery. He displayed courage under the most difficult of circumstances” said Treasury Secretary Douglas Dillon on Dec. 3, 1963.
Hill continued to serve for the First Lady’s detail for a year after the assassination. During President Johnson’s administration, Hill became the Special Agent in Charge of Presidential Protection. By 1971, he had been promoted to Assistant Director of the Presidential Protective Division. When Hill retired from the Secret Service in 1975, he was Assistant Director responsible for all protective forces.
Despite his success, Hill still felt immense grief over the assassination. This led to a struggle with alcoholism for a brief period following his retirement. Despite the guilt he felt, Hill was later able to find closure after visiting the scene of the incident and realizing that there was nothing he could have done. Writing also helped him express himself. After his career in the Secret Service, Hill became well known as an author. His books “Mrs. Kennedy and Me,” “Five Days in November” and “Five Presidents” became #1 New York Times bestsellers, and National Geographic is currently planning a television series based on “Five Presidents.” Hill would go on to receive Concordia’s Alumni Achievement Award in 2011.
Today, Hill spends his time as a guest speaker and has taught at the Federal Law Enforcement Training Center. He also continues to work with the Secret Service in discussing protective strategies and procedures. The Rough Rider award will be presented to Hill during a public ceremony on Nov. 19 at 1 p.m. at the Lewis & Clark Interpretive Center.