E.B. White on Writing for the Average Reader 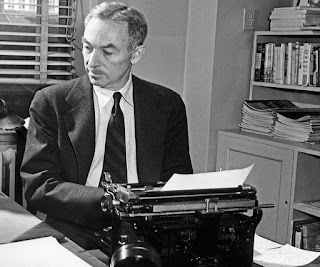 In an essay titled "Calculating Machine," White wrote disparagingly about the "Reading-Ease Calculator," a device that presumed to measure the "readability" of an individual's writing style.
There is, of course, no such thing as reading ease of written matter. There is the ease with which matter can be read, but that is a condition of the reader, not of the matter. . . .

There is no average reader, and to reach down toward this mythical character is to deny that each of us is on the way up, is ascending. . . .

It is my belief that no writer can improve his work until he discards the dulcet notion that the reader is feebleminded, for writing is an act of faith, not of grammar. Ascent is at the heart of the matter. A country whose writers are following the calculating machine downstairs is not ascending--if you will pardon the expression--and a writer who questions the capacity of the person at the other end of the line is not a writer at all, merely a schemer. The movies long ago decided that a wider communication could be achieved by a deliberate descent to a lower level, and they walked proudly down until they reached the cellar. Now they are groping for the light switch, hoping to find the way out.

Email ThisBlogThis!Share to TwitterShare to FacebookShare to Pinterest
Labels: author, E.B. White, On Writing, Writing for the Average Reader