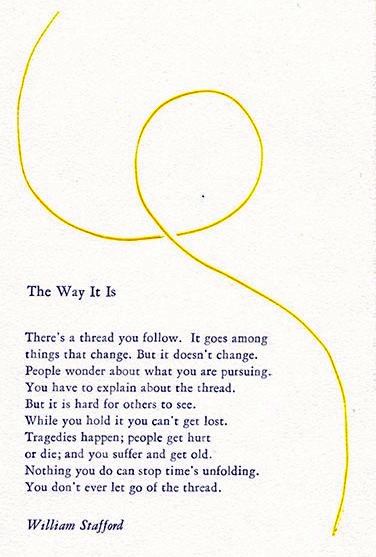 The poet William Stafford had developed an exercise that he called The Golden Thread. He believed that if you handled very carefully the detail of language and followed the detail through association, sound and tone it could lead you into a rich and meaningful world where you could begin to inhabit a more sacred universe.

One of [William Stafford’s] most amazing gifts to poetry is his theme of the golden thread. He believes that whenever you set a detail down in language, it becomes the end of a thread… and every detail –the sound of the lawn mower, the memory of your father’s hands, a crack you once heard in the lake ice, the jogger hurtling herself past your window– will lead you to amazing riches.

Robert Bly, The Darkness Around Us is Deep, p. vii.


The exercise of the Golden Thread can be an interesting pursuit if one also relates it to one’s purpose. We might think of it as following our purpose through language and writing.

Each and every one of us is following our own thread. Some may not know where you have been or where you are going, but you cannot let go of the thread you are following.