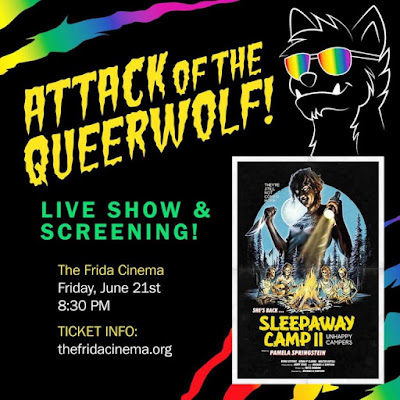 Everyone’s favorite serial killer camp counselor, Angela Baker, is back to slew a whole new group of teenagers. After years of therapy (and surgeries), Angela is given a job at Camp Rolling Hills – but history begins to repeat itself when she goes on a murderous rampage once the campers begin misbehaving…
The show begins 8:30PM!  Throw on your shortest summer shorts and prepare to camp until you die!
Says Blumhouse’s Attack of the Queerwolf LGBTQ, “The token queers at Blumhouse go through the horror canon to see where on the undead Kinsey scale your faves belong! Don’t be nervous: we’ve done this before! Hosted by Brennan Klein, Michael Kennedy, Nay Bever, and Sam Wineman!”
Directed by Michael A. Simpson | 1988 | 80 minutes | Rated R

Friday, June 21 — 8:30pm
“I like the out of the box approach — not too many 80s slashers focus mainly on the killer (an unmasked one at that), and was a rather unique way of more or less remaking the original film . . . while giving it its own identity. ” — Brian Collins, Horror Movie A Day
“Every good horror movie deserves a equel and the 80’s classic Sleepaway Camp has thankfully delivered a second helping. . . . Just as the original, the second installment of this movie has some really unique kills.” — Absolute Horror
“What saves this enterprise is its winking, self-referential (and self-mocking) quality, something that makes it a bit of a progenitor for later entries like the Scream [franchise]. . . . The fun of Sleepaway Camp II: Unhappy Campers is not in any putative character information, but in the nonchalant way Angela marauds her way through a series of boorish victims. On that level, this is one camp worth visiting.” — Jeffrey Kauffman, Blu-ray.com

Email ThisBlogThis!Share to TwitterShare to FacebookShare to Pinterest
Labels: Attack of the Queerwolf, Blumhouse, Michael A. Simpson, Sleepaway Camp 2