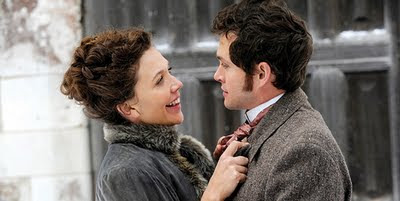 It's fun to remember sometimes (all the time?) just how different San Francisco is from the rest of the world, a fact that moviemakers unsurprisingly utilize when it suits a new project.
This fall, Maggie Gyllenhaal and Hugh Dancy star in a quasi-indie film called Hysteria, a Victorian-era romantic comedy about the invention of the vibrator and its fascinating use in the treatment of a "disease" called hysteria. (It's shorthand for "Women feeling emotions is unnatural and should be socially shunned and treated.") A treatment for this condition? Orgasm.
In need of some inspiration and some images of vibrators that your great-grandmother may have used, the film crew turned its attention to San Francisco's friendly neighborhood sex toy store, Good Vibrations.
Since its founding in the 1970s by Joani Blank, the small chain of stores and mail-order service has maintained a collection of hundreds of vibrators, according to Good Vibrations staff sexologist Carol Queen.
"They range in age from the 1890s all the way through the early 1970s, many of them very much vibrators of their particular moment in historical time. You can really see the design of the 20th century go by when you look at the collection," Queen says.
The producers of Hysteria asked Good Vibrations for photos of items in its collection, which store spokesperson Camilla Lombard says will probably be featured somehow in the film's opening or closing credits.
Some of the oldest vibrators in the collection run not on electricity but by a hand crank -- "like an egg beater," Queen says.
"There's a crank handle on the side of an item that, when it's turned, causes the whole thing to shake very fast, which is essentially vibration," she says.
Good Vibes was good enough (sorry) to send along some photos from its collection.
==================
​
Thursday Trailer Face-Off! Hysteria vs. A Dangerous Method
By Alexandria Symonds
INTERVIEW MAGAZINE
September 1, 2011
http://www.interviewmagazine.com/blogs/film/2011-09-01/thursday-trailer-face-off-hysteria-a-dangerous-method

Welcome to Thursday Trailer Face-Off, a feature in which we cast a critical eye on two similar upcoming film releases, pitting them against each other across a variety of categories to determine which is most deserving of your two hours. This week: Hysteria vs. A Dangerous Method, two based-on-true-story films about how doctors of bygone eras "helped" their female patients with sex-related neuroses—by literally taking matters into their own hands!

Premise
In Hysteria, a cute young doctor in London goes to work for an older one who specializes in treating hysteria, a once-common diagnosis that attributed "crazy" (mostly really not that crazy) female behavior to some kind of rebellion of the uterus. (Really! This was only like a hundred years ago! This is what passed for "medicine" back then!) The way the older doctor goes about treating this condition is by putting his patients' midsections under a little curtain and then manually stimulating them to orgasm, which apparently makes them all better. The movie concerns the two doctors' attempts to create a machine that will do this stimulation for them, so their hands don't get so tired. They end up inventing the vibrator, but not before a feisty young woman played by Maggie Gyllenhaal (the older doctor's daughter!) makes fun of them for it. A Dangerous Method concerns a lot of the same themes, but isn't a comedy: it's a psychosexual thriller about the real-life relationship between Carl Jung and Sigmund Freud, and what happens when a patient with a whole host of sexual issues, Sabina Spielrein, comes between them. Sabina used to be spanked by her father, and now she has a fetish for it, which Dr. Jung is only too happy to indulge. He embarks on a sexual relationship with his patient, which doesn't sit well with Freud—not to mention, you know, Jung's own wife, Emma. Vincent Cassel is also somehow involved. Frankly, we can't decide which premise we like better! Advantage: Tie

The Doctors
Hysteria's younger doctor is played by Hugh Dancy, who is looking cuter than ever these days; he's really grown into his face, or something. His mentor is played by Jonathan Pryce, one of those actors you see everywhere once you realize you know who he is: Brazil, a James Bond movie, The New World, the Pirates of the Caribbean movies... he's a workhorse. In A Dangerous Method, Freud is played by Viggo Mortensen, while Jung is played by Michael Fassbender—who basically has a lock, it seems, on the smoldering-sexy, morally compromised male lead roles in Hollywood right now. These two are indisputably the bigger stars, though we hope for Dancy's sake that he catches up to them in the next few years. Advantage: A Dangerous Method

The Ladies
The female leads in both of these movies are actresses about whom we have mixed feelings: generally, we think that Hysteria's Maggie Gyllenhaal is a very good actress who often has not-so-great taste in roles (um, Mona Lisa Smile?), while Keira Knightley consistently bags great roles without actually being a versatile enough actress to justify them. Grimacing and talking through your teeth every once in a while is not the same as acting! So we'll table them for a moment; what about the supporting actresses? Hysteria features Felicity Jones, the British Like Crazy star who's poised to blow up if that film does as well in theaters as it did at Sundance. Besides Knightley, A Dangerous Method stars Sarah Gadon as Emma Jung; she's done a lot of TV thus far, but she has four films on the horizon, and she's so pretty. She, like Jones, may be a big star in just a few years; but Jones has the buzz, tipping the scales in Hysteria's direction. We'll add that we appreciate Hysteria for casting Gyllenhaal but not succumbing to the impulse to let her boobs go unsupported; Gyllenhaal is infamous for her bralessness in real life, and that sometimes carries over into film (we're looking at you, Sherrybaby, and we're not happy about it). But look how hot she looks at 0:33, properly wrangled into a strapless evening gown! That's enough to cinch it. Advantage: Hysteria

Director
Hysteria was helmed by Tanya Wexler; it's her third feature, after 1998's Finding North and 2001's Ball in the House (which apparently the incoherent tagline, "Home Sweet Home is Murder." What?). She is also the half-sister-in-law of Lou Adler, if that means anything to you. A Dangerous Method wins this one pretty easily: it was directed by David Cronenberg, he of Eastern Promises and A History of Violence. Yeah, some of his earlier work is purposefully hard to watch (The Fly, Naked Lunch, the Crash that's about a car-crash fetishist), but you can't say the man hasn't made a name for himself. Plus, he's directing next year's DeLillo adaptation Cosmopolis, which will probably be great. Advantage: A Dangerous Method

Zany Period Detail
A Dangerous Method is a drama, and is not really supposed to be funny, but for some reason we can't stop cracking up over the scene excerpted in the trailer starting at 1:08, when Freud and Jung go for a sailboat ride. "There's a rumor you've taken one of your patients as a mistress," Freud says, wearing a full three-piece suit and hat, chomping on a cigar, fondling a cane, scrunched up in the tiny boat. It's like spot-the-phallus! (It could also be that it reminds us of the excellent Mitchell and Webb sketch "Posh Jaws.") In Hysteria, the period detail is actually supposed to be funny, and in many instances, it is: the powdered wigs in the party scene (0:33); Maggie Gyllenhaal punching a guy in the face in elbow-length gloves (1:40); the little goggles the doctors wear while testing out their "electrical assistant" (1:45). Of course, the feather-duster vibrator itself takes the cake, from its first appearance at 1:00 to when it blows up the electrical supply at 1:07 to its maiden voyage at 1:19. The device itself is inherently funny—funnier even, we're sorry to say, than Viggo Mortensen in fancy dress on a tiny boat. Advantage: Hysteria

Genuine Sexiness
This is probably a pretty contentious category—different strokes for different folks—but our mind's made up. We're not sure how the Vincent Cassel character figures into A Dangerous Method (he's like, a super-libidinous hobo, or something?) but we'll admit we thought the split-second shot where he's groping some lady up against a fence looked sort of interesting—until we freeze-framed it at 0:59 and saw the extremely bored look on her face. That's not sexy. Nor, we have to say, is the whole Knightley-spanking bit (starting at 0:30); maybe that does it for some people, but to us she mostly just seems like she needs to work through her issues. There's another hint of a sex scene at 1:08, but it's filmed through a window, which again gives rise (hah!) to a sense of unease. Not so sexy. Hysteria, by contrast, treats Victorian-era sex as a silly endeavor—but that's the thing; sex often is! And most of the ladies receiving treatment are not Knightley-level gorgeous, we'll admit that. They're a little silly, too. But we do think Hysteria is the sexier of the two movies, in spirit. It seems to have a fun, sex-positive, feminist view of sex—witness Gyllenhaal's declaration at 1:35. "There is a social revolution afoot!" she cries. "Women will no longer be denied our rightful place!" And that's a whole lot sexier than a married doctor starting an ethically dubious relationship with a young female patient who was once the victim of physical abuse. Right? Advantage: Hysteria