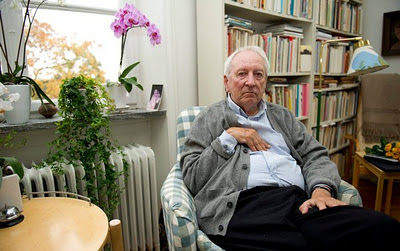 Maja Suslin/European Pressphoto Agency
Swedish poet Tomas Transtromer at his home in Stockholm on Thursday after receiving the news that he won the 2011 Nobel Prize in Literature.

Tomas Transtromer, a Swedish poet whose sometimes bleak but graceful work explores themes of isolation, emotion and identity while remaining rooted in the commonplace, won the Nobel Prize in Literature on Thursday.

Announcing the award in Stockholm, the Swedish Academy praised Mr. Transtromer, saying that “through his condensed, translucent images, he gives us fresh access to reality.”

The assembled journalists cheered upon hearing that Mr. Transtromer, who was born in Stockholm, had won the prize.

Mr. Transtromer, 80, has written more than 15 collections of poetry, many of which have been translated into English and 60 other languages.

Critics have praised Mr. Transtromer’s poems for their accessibility, even in translation, noting his elegant descriptions of long Swedish winters, the rhythm of the seasons and the palpable, atmospheric beauty of nature.

“So much poetry, not only in this country but everywhere, is small and personal and it doesn’t look outward, it looks inward,” said Daniel Halpern, the president and publisher of Ecco, the imprint of HarperCollins that has published English translations of Mr. Transtromer’s work. “But there are some poets who write true international poetry. It’s the sensibility that runs through his poems that is so seductive. He is such a curious and open and intelligent writer.”

“He’s worked for much of his life as a psychologist, and the work is characterized by very strong psychological insight into humanity,” Mr. Astley said.

Mr. Transtromer was born in Stockholm in 1931. His mother was a schoolteacher and his father a journalist. He studied literature, history, religion and psychology at Stockholm University, graduating in 1956, and worked as a psychologist at a youth correctional facility.

In 1990, Mr. Transtromer suffered a stroke that left him mostly unable to speak, but he eventually began to write again.

On Thursday afternoon, the stairwell in Mr. Transtromer’s apartment building filled with journalists from all over the world seeking reaction, the Swedish news media reported.

Visibly overwhelmed, Mr. Transtromer finally appeared, accompanied by his wife, Monica. Speaking on his behalf, she said her husband was most happy that the prize was awarded for poetry. “That you happened to receive it is a great joy and happy surprise, but the fact the prize went to poetry felt very good,” she said, addressing him at a gathering that quickly moved into the vestibule of their home in Stockholm.

There was also a celebration among Swedes, many of whom have read Mr. Transtromer since his first book of poems, “17 Poems,” placed him on Sweden’s literary map when he was just 23.

“To be quite honest it was a relief because people have been hoping for this for a long time,” said Ola Larsmo, a novelist and the president of the Swedish Pen association. “Some thought the train might have left the station already because he is old and not quite well. It felt great that he was confirmed in this role of national and international poet.”

John Freeman, the editor of the literary magazine Granta, said: “He is to Sweden what Robert Frost was to America. The national character, if you can say one exists, and the landscape of Sweden are very much reflected in his work. It’s easy because of that to overlook the abiding strangeness and mysteriousness of his poems.”

But in the United States, Mr. Transtromer is a virtual unknown, even to many readers of poetry, despite the fact that he has been published in English by several widely known publishers.

Mr. Halpern said that “Selected Poems,” originally published in 2000 by Ecco, part of HarperCollins, would be rereleased within days. On Thursday morning, print copies of his books were already backordered on online retailer sites, and electronic versions were difficult to find. New Directions, an independent publisher, released “The Great Enigma,” a poetry collection, in 2006; Graywolf Press, a publisher based in Minneapolis, released “The Half-Finished Heaven” in 2001.

Jeff Seroy, a spokesman for Farrar, Straus & Giroux, part of Macmillan, said Thursday that the imprint had acquired a volume of Mr. Transtromer’s work, translated by Robin Robertson, called “The Deleted World,” originally published in 2006. Mr. Seroy said the book would be released by year’s end.

Much of Mr. Transtromer’s work, including “The Half-Finished Heaven,” was translated by his close friend and fellow poet Robert Bly. Mr. Bly has been named as one of the central people who introduced Mr. Transtromer to a small but devoted group of American readers.

The selection of a European writer for the literature Nobel — the eighth in a decade — renewed criticisms that the prize is too Eurocentric. The last American writer to win a Nobel was Toni Morrison in 1993. Philip Roth has been a perennial favorite but has not been selected.

The committee noted after the announcement on Thursday that it had been many years since a Swede had won. It last happened in 1974 when Eyvind Johnson and Harry Martinson shared the prize.

Peter Englund, the permanent secretary of the academy, said this week that the literature jury had increased the number of “scouts” it employed to scour for books in non-European languages.

And once again, the jury proved its inscrutability. In previous years, the choice of relatively unknown writers like Herta Müller of Germany has surprised Nobel watchers; in other years, winners like Harold Pinter or Orhan Pamuk have raised questions about whether the Nobel committee is overly influenced by politics.

While Mr. Transtromer has been a longtime favorite to win the Nobel, he has also won other prizes, including the Neustadt International Prize for Literature, the Bonnier Award for Poetry, the Petrarch Prize in Germany and the Bellman Prize.

The Nobel Prize comes with an honorarium of nearly $1.5 million.