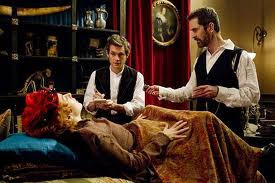 NEW YORK (November 10, 2011) – Sony Pictures Classics announced today that they have acquired all US and South African rights to HYSTERIA.

“HYSTERIA is a winner on all counts. It is funny, fresh and warm. From director Tanya Wexler’s expert filmmaking to her accomplished production team (sets, costumes and cinematography are all impressive) to the great performances from the entire cast (Maggie Gyllenhal is at an all-time career best here), this is a movie audiences will embrace in a major way,” says Sony Pictures Classics.

The deal was negotiated by Cassian Elwes, with Elsa Ramo representing the producers.